By Tim Miller
3 Comments
Kevin and Hong Juan Lee are not quite sure what they will do to keep themselves busy now.

For the past 29 years, the couple have worked nearly seven days a week in the kitchen of their Dunedin restaurant, the Asian.

Last night, when the final customers finished their meals and paid their bills, the red "open" sign outside was switched off for last time.

As on most nights, the Asian restaurant's kitchen is a hive of activity before diners arrive for their meals. Its final night of business was no different. Photos: Craig Baxter
"We've been serving some of the customers for three generations and it makes me quite sad to miss them ... From my heart I thank them all," Mr Lee said.

On Friday, they will hand over the keys to their building they have worked and lived in since moving to New Zealand from southern China.

"When we moved here 29 years ago, our second son was only a couple of months old and this has been our life.

"Our children have grown up in here."

Not much had changed since they first opened - crispy chicken and cashew nut pork dishes were still two of the most popular orders. 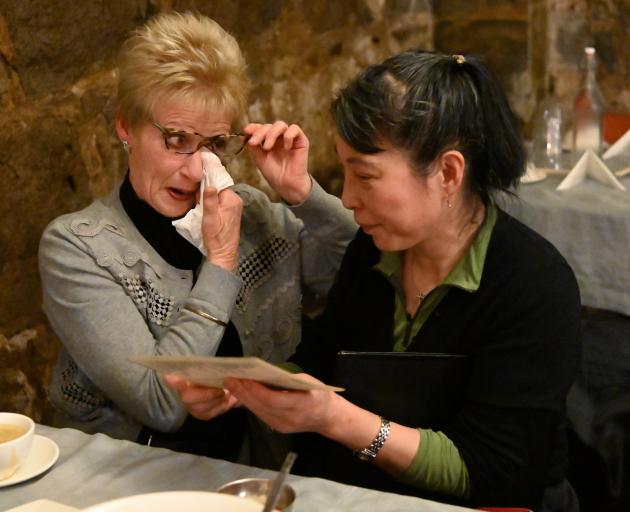 Ann Mee, a regular for the past 25 years, and the Asian's owner, Hong Juan Lee, share an emotional moment before Mrs Mee's final meal at the restaurant last night.
Since announcing at the start of the year they would be selling the restaurant, it had been full most nights and it had been impossible to make a booking in the past two weeks, he said.

In December, the couple will move to Christchurch but are not quite sure what they will do in their retirement.

Last night, more than 200 people sat and ate a final meal and many more made sure to order a last takeaway.

The closure had not quite sunk in for regulars Ann and Graeme Mee, of Wingatui, who have dined at the restaurant about twice a week for the past 25 years. 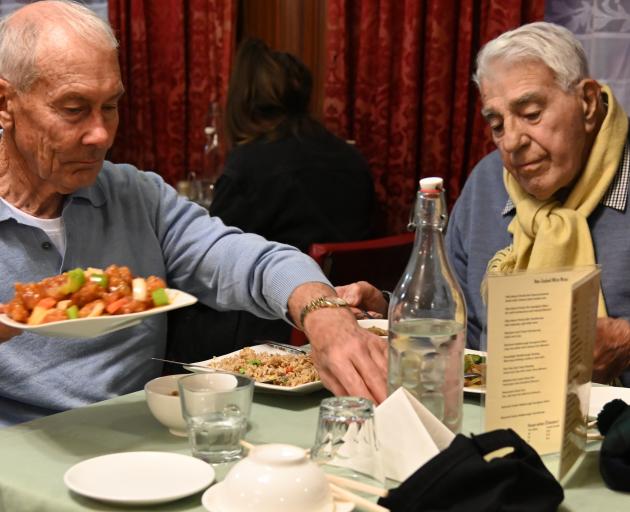 Enjoying a last meal at the Asian after years of patronage are Bill Menlove (left) and Bernard Esquilant.
There were tears as Mrs Lee briefly sat with the couple, in between .

"They always make sure there is a table for us no matter how busy it is when we ring up. They're just really wonderful people," Mrs Mee said.

The company was still undecided as to what it would do with the building.

My Husband Hareesh ,took our wee family for a dine out to his favourite restaurant in Dunedin ,just two days before he went home to the Lord on the 2 nd Feb 2019.
That was the last Dine out with my love and
this news is so much of sentimental for me,and I do cherish all those lovely memories we had there !!
Also,much love to the Asian restaurant owner,Mrs Lee who always welcomed us with a beautiful smile and found time to have a small chat with us whenever we were there ☺️☺️

Nishareesh that is a memory to treasure for you and your family - cherish those lovely memories , thoughts are with you , We took my elderly mother there for her birthday, in 2016, Mum has dementia, just Mum my wife and I waiting for others to turn up, we asked mum if she had been here before, ( we knew she had been for our nephews Birthday) she said no, we corrected her by telling her she got kicked out last time because she was drunk and dancing on the tables, she laughed. Thinking nothing of it ,the others arrived, we ordered our meal fro 12 of us, while waiting for our meals to arrive we were all chatting amongst ourselves. Unknown to my wife or me, Mum was telling the other guests she got kicked out last time for being drunk and dancing on the table. It wasn't until the end of the meal my sister told us what Mum was telling everybody. The Asian was always a great place unfortunately I only got to experience it when we returned to Dunedin for 18 months.

Farewell to a great Dunedin icon. You will be missed!