After 40 minutes of treading water and trying desperately to hold on to his capsized boat, Jim Murdoch began to question how much longer he could last.

"I was running out of puff."

Earlier this month, Mr Murdoch, of Milton, was returning to shore after fishing with three others when his boat capsized on the Taieri Mouth bar.

As a fisherman for more than 16 years, and crossing the bar at least 10 times a year, he now wants to warn others to "take absolutely no chances".

Later that week, another boat got into trouble at the bar when two people were tipped out at high tide.

Following the events, an educational meeting about crossing the bar safely was co-ordinated by the Brighton Surf Life Saving Club and will be held next month.

Mr Murdoch said the meeting was important, even for those who had crossed the bar many times. 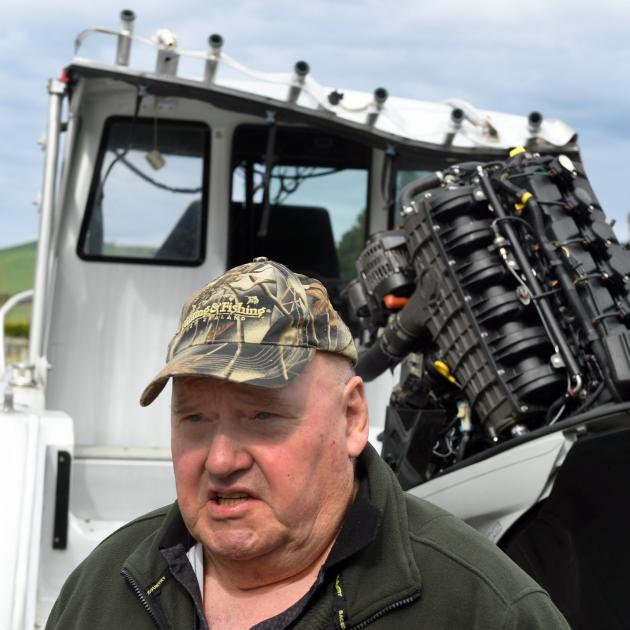 Jim Murdoch, of Milton, with his boat which capsized on the Taieri Mouth bar earlier this month. PHOTO: STEPHEN JAQUIERY

"After we have been over the bar many times, we all think we know what we’re doing."

Despite the bar appearing safe to cross, his nearly 7m boat hit it. When they tried to back off the bar, waves crashed over the boat, causing it to quickly fill with water, he said.

"We probably should not have backed off. In hindsight, we should have just sat there and lifted the motor, and floated over as the tide rose.

"But it’s all very good in hindsight. You know what to do afterwards but under pressure you make choices sometimes you should not," he said.

Despite wearing life jackets, fighting the cold water which continually pulled him out to sea became physically tiring. Mr Murdoch said he did not know how much longer he could have held on.

"I got washed away [from the boat] about three times. When the boat is upside down there is nothing there [to hold on to]," he said.

When he did manage to stay close to the boat, his legs were cut up by the boat’s propellers.

"We were in the water for over 40 minutes and we were starting to run out of puff."

That was until help was spotted on its way. The community pitched in to help rescue them, as well as Coastguard Dunedin and police.

Mr Murdoch said the experience made him realise what could be done differently.

The boat on the bar. PHOTO: PETER MCINTOSH

He suggested putting phones in waterproof bags and having a phone and beacon attached to at least one person. There was no time to grab anything once the boat started to flip.

He also said life jackets should have crutch straps to avoid them riding up, which made it difficult to swim.

The public meeting will be held at the Brighton Surf Life Saving Club on October 12, at 7pm.

The harbourmaster and Coastguard Dunedin, along with others will also talk at the event.