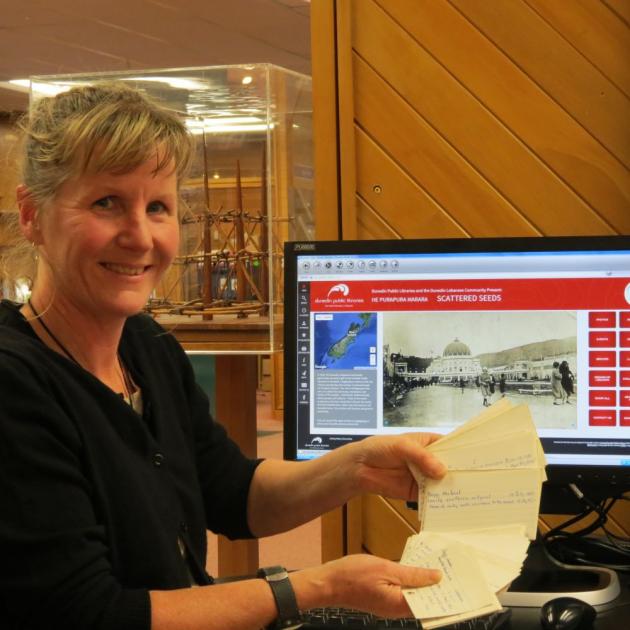 Emma Milburn shows the old index cards, which Dunedin Public Libraries has begun to digitise, in front of the recollect home page where the archived material will be able to be accessed. Photo by Joshua Riddiford

The 199,000 index cards from 1851-1993 containing information from newspapers and about community groups are being uploaded online as part of a digital archive entitled ‘‘Scattered seeds - He Purapura Marara''.

Collections and access manager Linda Geddes was under no illusions about the scale of the project: ‘‘It might take 10 years''.

Library event co-ordinator Kay Mercer said the library was looking for transcribers willing to help with the project.

It was a ‘‘gruelling search'', she said.

Ms Geddes said there might be some community interest in contributing to the project.

"I can imagine a few people wouldn't mind doing something like this, chipping away at it.''

The project was made possible by the donation of $55,000 from the Dunedin Lebanese Community (Cedars of Lebanon), Ms Geddes said.

The donation was important and ‘‘a significant investment in the cultural history of Dunedin''.

Lebanese settlers in Dunedin had their histories archived on the website. Digital outreach co-ordinator Emma Milburn said the records showed the interconnections of many Lebanese families.

Ms Mercer said it was hoped the digitisation centre would act as a ‘‘kete'' or ‘‘knowledge basket'' for the community.

The digital archive can be accessed at dunedin.recollect.co.nz.