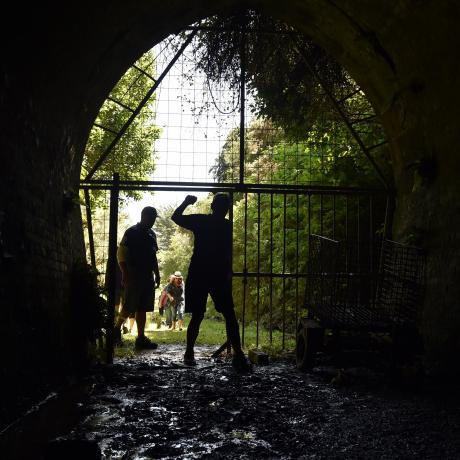 The Dunedin City Council has given a cash injection to the trust pushing to reopen the Chain Hills tunnel to walkers and cyclists.

Dunedin Tunnels Trust chairman Gerard Hyland said the council had agreed to donate $57,000 to the project, pushing the trust close to its goal with less than a week to go until deadline day.

The money came from an earlier project fund, established by the council years ago, to investigate the project's feasibility, he said.

``Putting that into the coffers means we are fairly close to [our goal].

The trust announced in February it had a deal to buy the property controlling access to the Chain Hills rail tunnel, but only if it could raise $550,000 in cash and loans by April 27.

It aimed to raise $400,000 towards the goal from interest-free loans, which were to be repaid once access to the tunnel was secured, using an easement, and the property on-sold.

The trust had quickly secured the loans it needed, helped by a series of $50,000 contributions, but donations had lagged well behind until this week.

The council's contribution meant about $87,000 in donations had now been received, while loans were oversubscribed, with $425,000 received, he said.

That left the trust's fundraising total at $512,000, but Mr Hyland said just $10,000 more was needed to confirm the purchase of the property.

The remainder of the money needed to reach the $550,000 goal would cover fees associated with surveying, legal and other services.

Council acting transport group manager Richard Saunders said the council was ``very supportive'' of the trust's aim, and would continue to be involved as the trust began developing its plans for the trail.

Mr Hyland said the cash injection also meant an earlier decision to auction naming rights for the tunnel portals was now on hold, while the trust focused on selling supporter plaques.

``These are exciting times, but there is still plenty of work to do.''