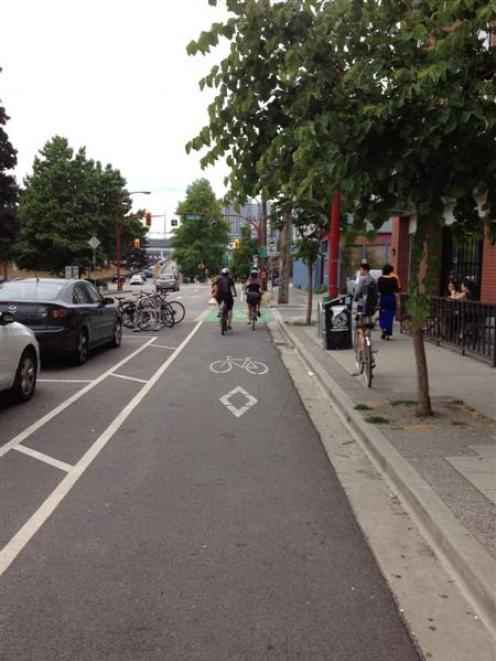 Recent articles in the ODT have focused on the development of cycleways in South Dunedin and plans for expanding them throughout the downtown area including the one way highway system and around the harbour.

As a result of my feedback highlighting what I see are major problems with the new cycle paths, I have been perceived by some councillors and council staff as being anti cycleway and against their development.

In fact, the opposite is true. I am actually ''for'' cycleways but what I object to is poorly designed cycleways.

To date, I have been involved in the blocking of the poorly planned Silverton St/Musselburgh Rise cycle path at the request of concerned and affected residents and against the impractical Victoria Rd (from Forbury Park through to the Esplanade) cycleway.

In April and May of this year, on multiple occasions, I also highlighted to DCC managers the design flaws and issues in South Dunedin including Hargest Cres, Coughtrey St and Moreau St road modifications.

At last, there has been agreement and acknowledgment from senior DCC staff that there are design flaws in these areas of the cycleways, not least of which is the inability for emergency vehicles to easily navigate the intersections.

Now, I am not a serious cyclist myself, but I do understand cycleways. Having previously lived in Vancouver, Canada, one of the most liveable and pro cycle cities, I saw the successful introduction of their cycleways.

On a recent visit, I was able to get an updated view of how they are used by the residents and tourists. Our planners often quote statistics regarding cycleway use from cities such as Vancouver. However, it is critical we do not try to compare potential cycleway demand here in Dunedin with the usage in Vancouver.

In the past 12 years, Vancouver and its local regions have seen population growth of 10% every four years, with 300,000 more cars on their roads (with no extra roads) and housing density increasing proportionately. If you work in downtown Vancouver, you will pay on average $75 to $100 per week to park your car.

Many residents struggle to find residential parking which is a significant barrier to car ownership. There is a population of more than 350,000 who can ride a bike to the downtown area in less than 15 minutes. So indeed there are practicalities that make it more beneficial to ride a bike and use the cycleways in Vancouver.

Currently, the population has embraced cycling with an increase from 105,000 users of the Burrard St Bridge in June 2013, to more than 185,000 in June 2015 (on average 3000 daily riders on return visits in the summer but fewer than 800 in the winter). For Vancouverites, it can be quicker and much cheaper to ride your bike than use your car to commute to work.

Contrast those statistics with Dunedin. We cannot compare Vancouver to our smaller population as we just don't have the same imperative in terms of constraints to either car ownership or usage.

However, from my observations in Vancouver, I have seen cycleways work effectively in quiet streets and neighbourhoods, without the need to dramatically alter residential streets for this to happen. And yes, you can also effectively run dual carriageway cycleways on busy road networks. What does this mean for Dunedin?

Secondly, we do not need to invest in two one way cycleways running down both one way streets of State Highway 1, when one single dual carriageway cycleway (just like the St Leonards to Maia cycleway) will be able to cope with the current and future demand.

Should it be amazingly successful, we could then build a second cycleway and have the deluxe version if there is a demand for it - not because it's nice to have. Finally, it is important to note that any cycleway is only as good as the user, just like a driver in a car.

Cycleways, even ones that are not separated by physical barriers, are safe environments and will reduce the risk of injury for cyclists, but only when both cyclists and motorists use them correctly.

Cyclists who put themselves in harm's way or do not abide by the road code are potential statistics and I consistently saw this in North America. I was also aware of significant pedestrian issues related to crossing cycle paths and it is imperative there is education provided to the public about proper usage and road rules.

I believe a connected cycleway around the entire harbour will become a Dunedin success story and will benefit residents and tourists. The investment in this by the DCC and the NZTA will be extremely positive for all users.

This will also increase the usage of residential area cycleways, if they are well planned and widely consulted on, which will enable cyclists to connect via the harbour pathway.

In closing, Dunedin can be a cycle friendly city but it needs to be done properly to ensure that we cater for all types of road users.

We actually don't need the ''Rolls Royce'' version but we do need to factor in and be mindful of the costs being paid by the ratepayers of Dunedin and the taxpayers and road users who are funding this infrastructure through the NZTA.

We can provide excellent connectivity and safety for cyclists without needing to build overly cumbersome bump outs, curbing or berms in most cases.

What we need is a little Kiwi common sense, some really good planning with broad consultation of that plan with road users, some excellent road lane markings and timely public education to make this work.