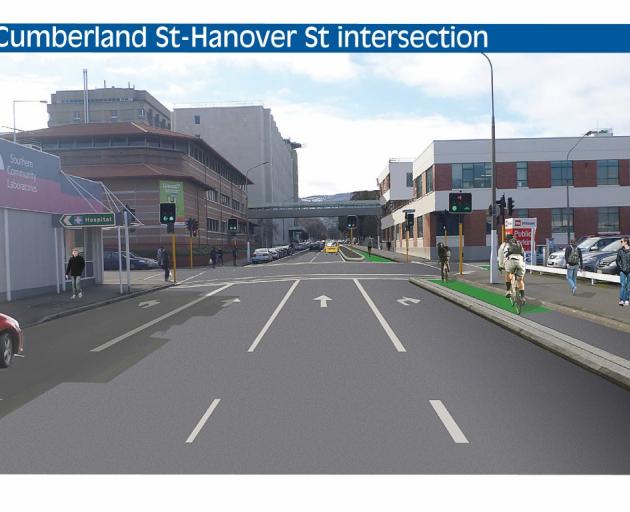 The project is intended to provide safe cycling on a roading system overrepresented in fatal and serious crashes, with two fatalities since 2011.

The first stretch to be built will run between the Botanic Garden and Albany St. Work is expected to start in May.

The new cycleway will result in the loss of about 258 parks. NZ Transport Agency projects team leader Simon Underwood said that was 130 fewer than originally mooted earlier in design development.

Dunedin Mayor Dave Cull said once designs were finalised, council planners would start work to find ways to include additional parking in the streets nearby to make up for the loss.

The push for a separated cycleway on the one-ways started in earnest after Dr LiHong He (34), a senior lecturer at the University of Otago school of dentistry, was run over by a truck outside Dunedin Hospital in 2012 while cycling.

The NZTA widened cycleways after the incident, and, at the request of the Dunedin City Council, began designing a separated cycleway.

The news of the start of the project was described as ''great'' by Mr Cull yesterday.

The Otago Museum said the revised proposal was ''a major improvement'' on an original design that did not allow parking by the museum reserve.

The University of Otago, which will also be affected by the first part of the cycleway to be built, said it ''strongly'' supported the move, which would improve student and staff safety, sustainability and make Dunedin a more attractive place.

Changes from earlier designs include running on the left-hand side of Cumberland St going south from the Botanic Garden to the university, instead of the right.

Mr Underwood said that change was made after feedback, and information that showed about 50% of cyclists would pull off to the left and ''filter off into the university block''.

On the rest of the route the right-hand side was chosen because it would have less effect on bus stops and keep cyclists out of the blind spot of heavy vehicles.

Asked why a single two-way cycleway was not chosen for the design instead of two one-way routes, he said that option was considered but a cycleway that ran with the traffic flow would be ''much more easily understood''.

A two-way cycleway also did not work well where there were a lot of driveways and access points at which drivers would have to look both ways on an otherwise one-way street.

Mr Underwood said contracts for the first part of the work would be tendered in the next two months. The design on a map released this week showed ''outline plans'' but more detailed design was still being completed.

Detailed design for the rest of the route would follow, and Mr Underwood said more would be learnt as building took place.

The NZTA had been in touch with businesses and retail outlets in the first stretch before Christmas to discuss what it was doing. The new design allowed the cycle lane and footpath to be narrower in some places, allowing for parking.

In terms of parking, the NZTA had focused on P5 and P10 parks, and high-use parks near institutions such as the museum and Dunedin Hospital.

Designs for places where the cycleway crossed driveways and building access points were still being worked on, but high use ones would include an area vehicles could pull into before turning.

Of the project, Mr Underwood said it was ''a pretty exciting opportunity''.

''This is all about making the one-way system safe to use.''

It was expected the first part of the project would be finished this spring.

''While some parking spaces will be lost from those available now, the new proposal is a good compromise which allows for enhanced cycle safety, while at the same time allowing visitors to the museum to park close to us.''

''The loss of parking is justified in terms of safety, and supporting cycling can reduce parking pressure in the long term.''

It is always quite intriguing to watch councils large and small make decisions that lead to the demise of their central business districts.
Mr Cull and DCC fervently wish Dunedin were flat so the masses could cycle everywhere, a la Copenhagen and others. But it's not. The world is round and Dunedin is hilly.
DCC's shrug of the shoulders and smirky grin that celebrates the removal of 258 car parks, coupled with the sell-off of at least two off-street car parks, reflects a very myopic view. People want convenient parking to shops and businesses. DCC persisting in removing car parks with a hint they may look for alternatives, will just encourage people to shop anywhere other than in the city centre.

No shoppers leads to no shops. No shops leaves Dunedin with a repeat of the Exchange area - it has been stagnant for 20 years.

But then it will be easier for very few who do cycle, so DCC and the Greens will have a tiny little victory. But Dunedin will not.

Dunedin's hill suburbs are hilly, but to quote your own words Keith: "Since when do you need flat trails to ride a bike? You don't have gears and pedals?" That said, I have not found the one-way system to be very hilly, but then I do have gears on my bike :-)

Parking is a bit of a red herring: most (all?) large businesses have their own parking, as do many smaller ones and there are several buildings dedicated to parking in the area. And there will still be parks on the one-way - most of them are staying. Though why we have an expectation of parking for cars on public roads is lost to me, especially or routes such as the one-way.

As a cyclist, this is stupid. That money would be much better spent on raising driver/cyclist awareness nationwide. I remember being taught basic road rules as a kid, that went a long way to improve my safety as a cyclist.

Awareness and observation on the road nationwide would go a long way in cyclist safety, more than just a length of road in Dunedin.

I already know of a lot of businesses that are going to move when the cycle lane takes up the remaining parks outside there businesses. What business wants to stay open if their customers can't park on the street. It sounds like a pretty stupid idea to me. I have travelled to many countries and never have I seen anything as stupid as this. In other countries cyclists know how to ride on the road. Maybe they should start making cyclists take a test if they want them to use the road, just like car users have to.