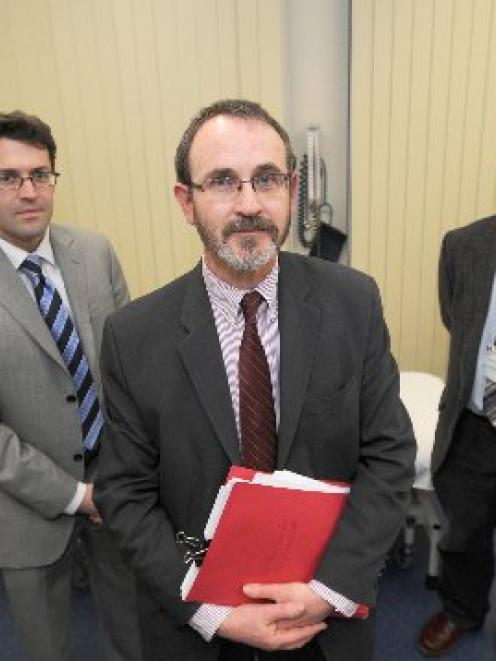 The neurologists, Dr Alan Wright, Dr Nick Cutfield and Dr John Mottershead, have spoken out about their fears for Otago and Southland neurosurgery patients if the service is delivered only in Christchurch. Dr Graeme Hammond-Tooke, their clinical leader, is overseas at a medical conference but the trio say he vigorously supports Dunedin neurosurgery.

Canterbury and the Southern DHBs are stuck in an impasse over whether the shared South Island neurosurgery service will be delivered from Dunedin as well as Christchurch.

Dr Wright said the depart-ment had watched with concern and disquiet as the inability to reach agreement stretched into months of uncertainty.

"We've watched this from behind the scenes for many, many months and have not made provocative or headline grabbing statements . . . we need to tell the people of Otago and Southland what was being proposed and what a catastrophe it would be if it went ahead."

The neurologists fear the impact of basing all six neurosurgeons in Canterbury, particularly for non-operative neurosurgical patients.

These are patients who do not require surgery, but may do if their condition changed.

Dr Cutfield expected the majority of non-operative patients would remain in Dunedin.

The prospect for some of these patients was grim if their condition changed and they urgently needed surgery.

They fear an increased risk of death, or more serious or permanent neurological disability, from delays.

Dr Cutfield said differences of opinion with Christchurch over whether patients should be transferred was a potential risk if the wrong decision was made.

Dr Mottershead said he disagreed with the argument put forward that greater involvement of neurologists and other non-neurosurgeons in non-operative care was positive as it would increase surgery volumes.

Non-operative management was a vital part of the neurosurgeon discipline and required specialised skill, he said.

Neurologists and neurosurgeons co-operated closely, with patients often transferred between the two specialties.

It helped when the communication was face to face, rather than over the telephone or by email, Dr Wright said.

It was important people knew the difference between neurology and neurosurgery as they were sometimes confused.

Neurologists had no surgical training, and it was the general and specialist surgeons who would be called on for the proposed "Darwin model" of surgeons performing emergency surgery to stabilise patients before transfers.

Neurosurgery and neurology share a ward at Dunedin Hospital, and also a team of nurses.

Dr Cutfield feared the impact of having no neurosurgery on attracting top nursing staff with an interest in neuroscience.

Neurologists and other specialists would be less attracted to Dunedin Hospital if it did not offer a full complement of specialties.

Disciplines were increasingly interdependent on one another in modern medicine, Dr Wright said.

The trio fail to see what the panel appointed by Director-general of health Stephen McKernan will achieve, as the arguments have already been thrashed out by the two DHBs.

Dr Cutfield was pleased consumer rights advocate David Russell was on the panel, as he would advocate for patient interests.

Dr Cutfield said the matter needed to be resolved quickly to give certainty to the two neurosurgeons appointed by Southern District Health Board chief executive Brian Rousseau.

Dr Wright also feared the impact on radiosurgery, which is offered in Dunedin but not Christchurch.

The procedures, which involve directing high-pressure beams of radiation at tumours, often required the input of a neurosurgeon.

The issue had mobilised clinicians, health board management and the community, which showed the depth of feeling about the issue, Dr Wright said.