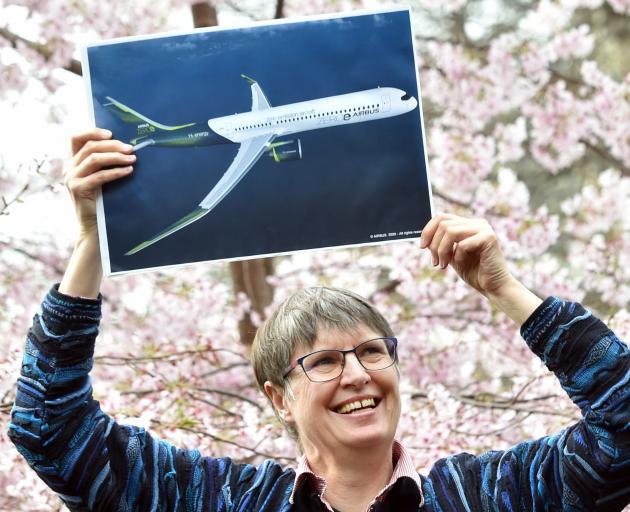 Prof Sally Brooker, of Otago University (right), says New Zealand has a chance to become a world leader in emissions-free domestic travel after Air New Zealand and Airbus announced a joint investigation into the use of hydrogen-powered aircraft this week.. PHOTO: PETER MCINTOSH
New Zealand’s domestic flight network could become a world-leading example of low-carbon flight if a newly announced joint research project fulfils its promise.

Air New Zealand and Airbus this week announced plans to investigate the future of zero-emission hydrogen-powered aircraft in New Zealand.

Prof Sally Brooker, of the University of Otago’s department of chemistry, said New Zealand could became a place to showcase zero-emission hydrogen-fuelled flights.

As the co-leader of the Germany-New Zealand Green Hydrogen Alliance she had been talking to both Airbus and Air New Zealand as well as to airport companies in Dunedin and Christchurch, she said.

And electric planes were looking well-suited for short-hop flights, such as across Cook Strait, Prof Brooker said.

But in between there were ATR-type flights, or the small jets that run up and down New Zealand, that made up a significant amount of Air New Zealand’s fleet.

‘‘They’re in the sort of zone where hydrogen gets very interesting,’’ Prof Brooker said.

‘‘I think... one of the reasons that Airbus are keen to sign up with us in New Zealand is that we have a good domestic network, and a future-looking airline in Air New Zealand, and a government that is also very behind getting emissions down.

‘‘We do have an opportunity, much like we did with Covid, to lead the world in this.

‘‘We could, if we decided to get stuck in here, and this probably requires government as well as Air New Zealand getting stuck in, we could be the first country to have a zero-emissions airline domestically.’’

Air New Zealand chief executive Greg Foran said given the country's commitment to renewable energy, which could be used to generate green hydrogen and a highly connected regional air network, there was a ‘‘unique opportunity’’ here.

At this stage, both hydrogen and battery electric aircraft were still on the table as potential options for shorter domestic flights, along with sustainable aviation fuel for long-haul operations.

‘‘This research will help to inform future decision-making as we work to decarbonise the airline.’’

Air New Zealand’s submission to the Climate Change Commission earlier this year said part of its plans for decarbonisation included operation of next-generation aircraft by 2035.