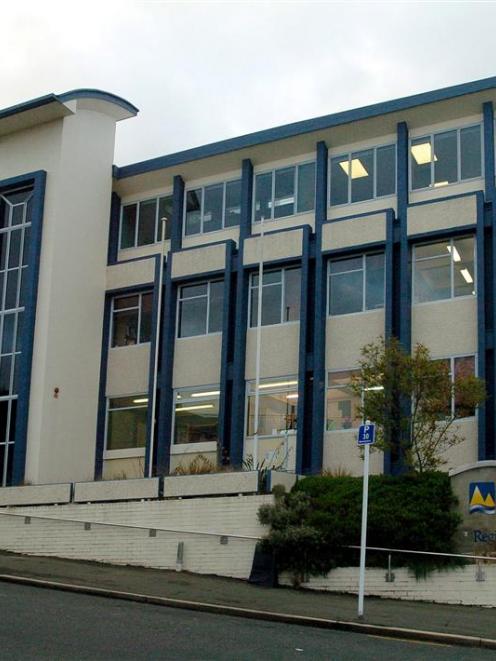 In the past three years the council has built a stand-alone council chamber and civil defence headquarters in its Stafford St office block's car park but a long-term solution to its overcrowding problems has yet to be found. Photo by ODT.
The Otago Regional Council will go into the next triennium having lost considerable experience from around its table, yet facing crunch time on some big issues.

In the past year long-term chief executive Graeme Martin has retired and veteran councillor Duncan Butcher is bowing out at this election.

The loss of experience could grow, given there are challengers for all seats on the council except for Moeraki - 11, including sitting councillors, fighting for six Dunedin seats, seven, including one incumbent, fighting for three Dunstan seats and three, including the incumbents, standing for the two Molyneux seats.

Whatever the council's composition after October 12, there are testing times ahead for it and new chief executive Peter Bodeker.

While the present council managed to get its 6A rural water quality plan change through to adoption, the hard work is just beginning - implementation when there are still a lot of unknowns about how the standards are going to be measured and an Environment Court hearing in January.

Also dominating is the work to determine a new Regional Policy Statement, which governs the future of natural and physical resources in Otago.

It will require significant input and agreement from Otago's district and city councils to ensure consistency with their district plans and to meet the Government's changing legislative requirements.

Then there is the ''albatross'' around the council's neck, its housing issue. In the past three years the council has built a stand-alone council chamber and civil defence headquarters in its Stafford St office block's car park but a long-term solution to its overcrowding problems has yet to be found.

This council has put aside $5 million in an interest-bearing account in preparation for the future decision.

There are other challenges the council will face - continuing to improve the region's air quality to meet national standards, completing the Water of Leith flood protection scheme, continual changes to public transport legislation and keeping tabs on landowners to ensure they keep their rabbit numbers down.

Then there is the work that cannot be predicted - responding to flooding and other natural disasters.

The council dealt with six flood events in the past year.

However, the work has not daunted the councillors; all but Cr Butcher are standing again this year.

Chairman Stephen Woodhead is standing in the Molyneux constituency that role and that of the deputy will be decided after the election.

The new council's first job will be to elect both. Deputy chairman David Shepherd is also standing, and long-time Mosgiel community board member Brian Miller is challenging for one of the two Molyneux seats.

Adding another seat to the Dunstan constituency means there are three positions available;

Company director Andrew Rutherford is also standing again, having failed to secure a seat in 2010.

Cr Doug Brown was elected to the Moeraki constituency unopposed.