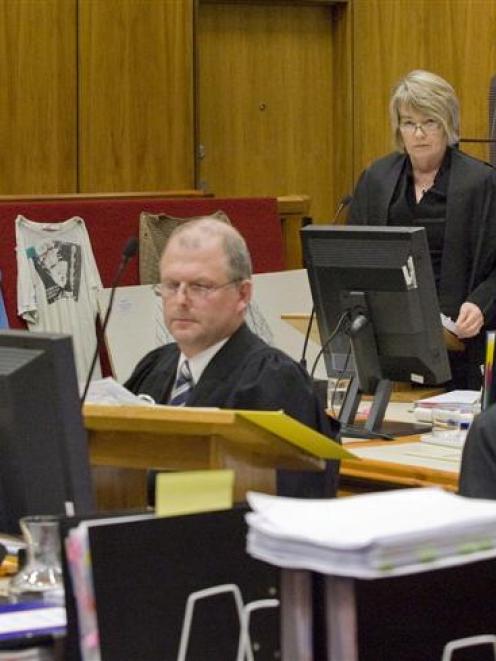 Helen Cull (back), cross-examines Barbara Short, shown on the video monitor, by video conference, during the re-trial of David Bain in the High Court at Christchurch yesterday. Listening are Crown counsel (from left) Kieran Raftery, Cameron Mander and Robin Bates.
Margaret Bain had become involved in "New Age things", believed in previous lives and thought she was related to Winston Churchill and the rulers of Egypt, a former family friend told the High Court at Christchurch yesterday.

When Margaret told her about those beliefs "I was very concerned", retired school teacher Barbara Short said.

Mrs Short was giving evidence by video-link from Sydney on the 38th day of the retrial of 37-year-old David Bain for the murder of his parents and three siblings at their Every St home on June 20, 1994.

She said she met Robin and Margaret Bain and their young son David in Papua New Guinea in the 1970s when she was teaching at the school where Robin was principal. They all belonged to the same church, were interested in music and were in a choir together.

Margaret and Robin would have been her closest friends during her time in PNG, Mrs Short told the court.

After she returned to Australia, the Bain family stayed with her on their way back to New Zealand in late 1988. It was then Margaret spoke about her "New Age" beliefs, and her belief in having previous lives.

"Some people might say she was mental," Mrs Short said. "She had problems."

Robin knew about it and later asked her to come to New Zealand and help Margaret.

She stayed with the Bains in Dunedin in January 1991, by which time Robin was living in a caravan on the property. She had previously had letters in which Margaret spoke about living in the caravan but that had changed by the time she arrived.

From her first day at Every St, she became aware of Robin's morning routine, Mrs Short said. He would enter the house through the outside kitchen door before coming up the stairs and going to the front room to pray.

She had inadvertently gone in while he was sitting in the bean bag, elbows on his knees, head in hands, praying. He would remain there for about half an hour before going back to the kitchen about 7.40am to finish making the porridge.

Margaret got up early the first morning but after that remained in bed until late, "so I'd take the dog for long walks", Mrs Short said.

When she and Margaret went on trips, she would minister to Margaret as a Christian.

"Margaret felt she was getting closer and closer to God, but I doubted it," the witness said.

"And she had started divining using a pendulum when deciding what she should buy."

Although Robin and Margaret obviously still had a loving relationship, Mrs Short said she could see they both wanted certain things to happen "and they were not necessarily the same".

She had heard them arguing at times, but they were generally polite about it.

"I heard a good argument one night. I think Margaret put it on for my benefit," Mrs Short said.

She described Robin as "very patient, an ever loving husband" who was trying very hard to keep the family together.

Margaret wanted Robin to do more around the house.

"And I think she would have liked to go back to work, but Robin was the old-fashioned type and wanted to be the bread winner."

She said Margaret talked to her quite a bit about Robin - "and I would stick up for him".

Margaret wanted Robin to change, to accept the beliefs she was getting from her meditation and her God, whereas he was praying and getting things from his God, the Christian God.

"She had a spiritual problem," Mrs Short told the court.

And while it was hard for people to understand, the problem between Margaret and Robin was spiritual.

It was "spiritual warfare", with each praying for the other to change.

"Margaret accepted me as a good friend. She listened to me, but she wasn't going to change."

Mrs Short said she felt sorry for the children, as Margaret was very bossy, but they "handled her as best they could".

She felt they had come to terms with Margaret's beliefs and "a little madness", although she recalled David telling her later they would avoid going home. But there was still a lot of love in the family, Mrs Short said.

Robin seemed to be "as normal" with the children.

Mrs Short slept in Laniet's room while staying with the family and she said she remembered seeing a photograph of Laniet holding a dark-skinned baby.

She asked whose baby it was and Margaret told her it belonged to a couple who were neighbours in PNG.

When she visited David Bain in prison in 1995, she asked him about the stories of Laniet giving birth to a baby in New Guinea and he told her it was "absolute rubbish". He said he would have known if Laniet was pregnant; he would have seen her.

• The trial of David Cullen Bain (37) continued in the High Court at Christchurch yesterday. Bain denies murdering his father and mother, Robin and Margaret Bain, sisters Arawa and Laniet and younger brother Stephen at the family home in Every St, Dunedin, on June 20, 1994.

• The Crown, represented by Kieran Raftery, Cameron Mander and Robin Bates contend Bain murdered the family, using his early morning paper round as an alibi and made it look like Robin shot them before committing suicide.

• But the defence, represented by Michael Reed QC, Helen Cull QC, Paul Morten and Matthew Karam argue Robin was the killer and turned the gun on himself because he was about to be exposed for an incestuous relationship with his younger daughter Laniet.

• The trial, before Justice Panckhurst and a jury of seven men and five women, began on March 2 and the Crown case is likely to be completed this week.