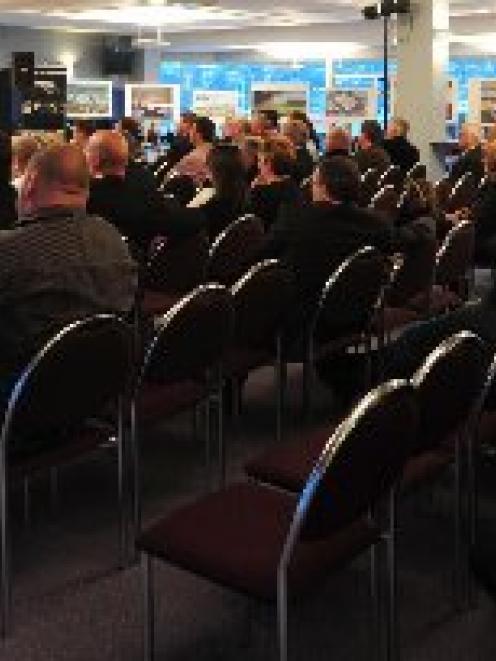 The Carisbrook Stadium Trust took its product to the public last night, with a function for those who hold the 29 boxes at the existing ground.

About 60 people listened as the trust marketing team explained what they would get for their money. Most spoken to later by the Otago Daily Times were quite positive about the price.

Prospective box holders have until April 16 to decide if they want to go into a ballot for a 10-year licence for one of the new 18 boxes - or ‘‘suites'' as they are referred to.

For that, box holders get seating for about 18 people in a ‘‘seating bowl'' and the opportunity to buy another six tickets.

In addition to a view of the game, the suites offer one car park, kitchen facilities, flat screen television and a telephone.

Food and beverage is an extra and is provided by stadium management. Trust chairman Malcolm Farry said this was another source of revenue for the stadium.

Box holders will be able to fit out suites to their own design, subject to stadium approval. They will get preferential booking rights to ‘‘nonscheduled'' events, such as concerts.

There was some uncertainty at the presentation over whether this would include a non-scheduled rugby match such as a Super 14 final.

Box holders are not guaranteed being able to use their boxes for Rugby World Cup matches. This did not seem to surprise those spoken to by the ODT.

The trust is endeavouring to raise $45.5 million as the private sector's contribution to the stadium.

In publicity material handed out at the presentation, the trust says Dunedin only has a rugby test this year because of progress on the stadium and there was ‘‘the very real chance'' Otago might not have a Super 14 franchise beyond 2010.