A matter of some contention 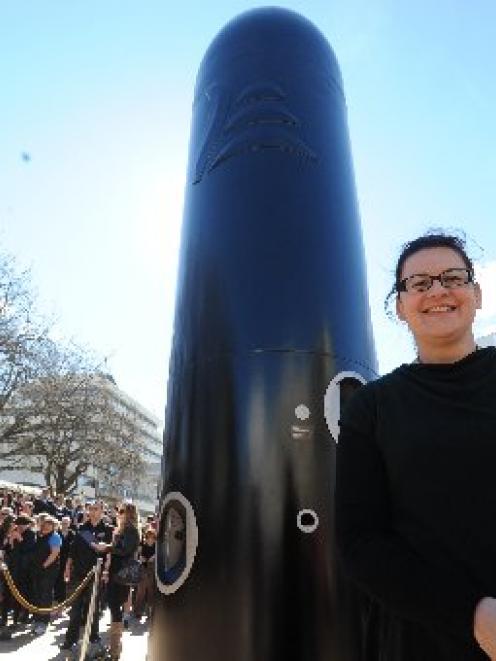 Artist Rachael Rakena and her artwork, Haka Peep Show, in the Octagon, Dunedin, yesterday. Photo by Peter McIntosh.
An artwork in Dunedin's Octagon that raises controversial issues of the "commodification of Maori and indigenous sportsmen" in the middle of the Rugby World Cup has made Mayor Dave Cull "pretty proud".

The artwork, in the shape of a deodorant can of a brand connected to the All Blacks, also considered the "sexualisation" of Maori, and artist Rachael Rakena yesterday said it did have a phallic reference.

It was also funded by Ngai Tahu, which put in $80,000, though some of that funding was for another work by the artist in Invercargill.

Mr Cull was yesterday unapologetic about backing the work in the middle of the World Cup.

"I must say I'm pretty proud of the fact Kai Tahu did not say 'let's put on a paua shell rugby ball'," he said.

"What it's doing is saying 'let's have a look at sport and cultural identity, and how they are commercialised and used sometimes'."

Rakena said the performers were chosen because they were Maori leaders in different fields, who did haka "as part of their everyday lives".

"The artwork considers the sexualisation and commodification of Maori and indigenous sportsmen through the use and exploitation of their masculinity and their culture, in the media."

The peep shows required a coin to operate.

The system was a form of koha, and the money would be returned to the "caretakers" of each haka.