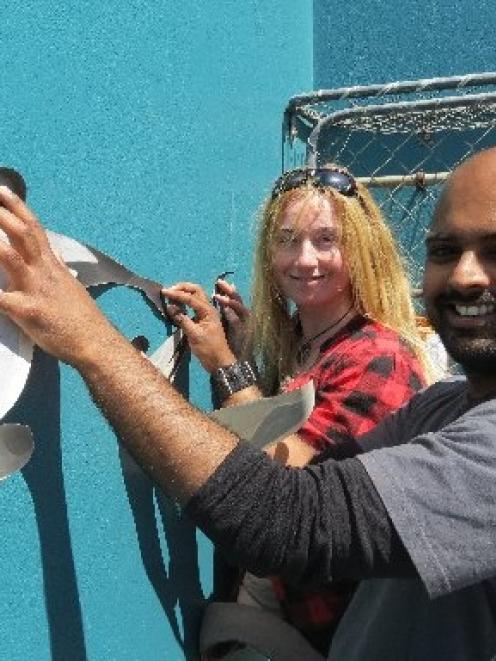 Our Seas Our Future co-ordinator Suzanne Burns and founder Noel Jhinku with a cut-out Maui's dolphin to be used in an awareness campaign. Photo by Jonathan Chilton-Towle.
A Dunedin marine conservation group is creating an art exhibition that puts into perspective the plight of one of New Zealand's most endangered species.

There are only an estimated 50 Maui's dolphins left in the world and to mark this Our Seas Our Future (Osof) plans to set up 50 newsprint Maui's dolphin cut-outs somewhere at the St Kilda Esplanade.

The cut-outs measure between 40cm and 50cm, and will be stuck to a wall some time in December.

Then they will be left to the mercy of the elements and will gradually fade, representing the decline of the species.

Osof is discussing which wall at St Clair will be used with the Dunedin City Council and business owners.

The dolphin cut-outs were designed by a Northland-based artist who sent them to Osof founder Noel Jhinku about a year ago.

Mr Jhinku hoped to use the cut-outs as part of a short film Osof was making about the Maui's dolphin. The project would also represent the Hector's dolphin which looked identical and was also endangered, he said.

''We were wanting to do something to increase the impact of the cut-outs as much as possible,'' he said.

The 20th Biennial Conference on Marine Mammals was to be held at the University of Otago in December and Mr Jhinku believed this would tie in well with the effort.

He hoped to get comment from some of the experts attending the conference for the film.

The 1.5m-long Maui's dolphin is the smallest and rarest marine dolphin in the world. It is a sub-species of the Hector's dolphin, and lives off the west coast of the North Island.

The dolphins have distinctive grey, white, and black markings and a short beak, and are most easily distinguished by their unusual round dorsal fin.

Maui's dolphins are generally found close to shore in pods of several dolphins.

The dolphins lived up to 20 years but had a very slow reproductive cycle with females only being ready to breed once they were at least seven years old.

Once they could reproduce, females only had one calf every two or four years.

The population had been decimated by fishing to the point where there were estimated to be only about 50 left alive in the world, Mr Jhinku said.

It is classified as a critically endangered species by the International Union for Conservation of Nature.