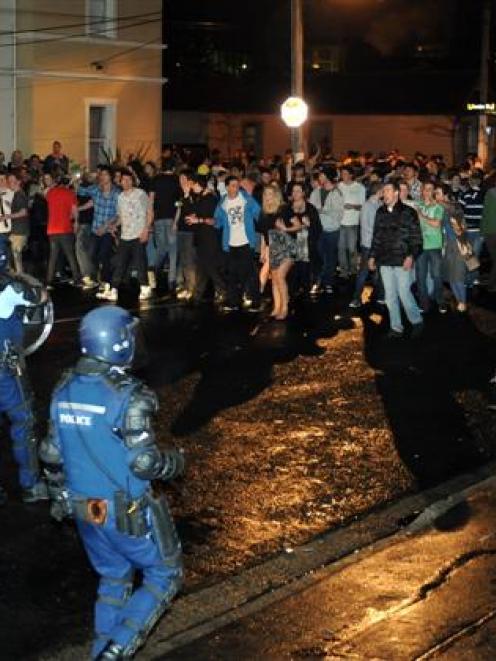 Members of the police riot squad clash with the crowd in Castle St yesterday morning. Photo by Stpehen Jaquiery.
City leaders have reacted with fury after the arrival of the Undie 500 rally from Christchurch again brought a weekend of violence, bottle-throwing and baton-charges to the streets of North Dunedin.

The disorder, during which up to 80 people - most of them University of Otago students - were arrested over two nights, has prompted renewed angry calls from Dunedin Mayor Peter Chin for events to be cancelled.

Mr Chin said the reputation of the university and the city were damaged, and students found to have broken the law should be dealt with "appropriately" by police and the judicial system.

Police had already said offenders would not escape convictions by being offered diversion and Mr Chin said police should "walk the talk".

"If a few potential careers are wrecked, so be it," he said.

"There may be some parents out there that are going to be to be feeling very sorry for themselves and their children."Any hopes of a better-behaved weekend were first dashed on Friday night, when police made about 20 arrests after hundreds of young people gathered on Castle St and set fires, pelted police with bottles and ripped up trees.

Police wearing protective equipment and armed with batons and pepper-spray took more than an hour to clear the street, he said.

"Many students were pepper-sprayed when they challenged the police line and officers had to call for more supplies as some had emptied their canisters on those students," he said.

Between 50 and 60 arrests were made during the night for offences including breaching the temporary liquor ban, disorderly behaviour, obstruction and wilfully setting fire to property, he said.

About 80% of those arrested across both nights were Otago students, 10% were from the University of Canterbury and 10% were not students.

They would appear in court at the end of the week.

Some appeared to have come from as far away as Gisborne and Taupo for the weekend, police said, and there were unconfirmed reports of youths as young as 12 years old on Castle St.

"The annual Undie 500 event only brings grief to Dunedin. Despite promises about improved behaviour, nothing has changed," he said.

Mr Chin said he was "hugely disappointed and quite angry", having earlier urged the event's organisers, the Canterbury University Engineering Society (Ensoc), to cancel the rally.

"It wasn't as though it was unexpected . . . people under the influence of alcohol lose all reason and are completely uncontrollable. It's just mob rule."

Mr Chin visited Castle St about 10.30pm on Saturday, when it was calm, but saw "some very sorry sights" during a visit to the Dunedin central police station at 5.30am yesterday, when some of those arrested were being processed.

"Looking into one or two of the cells there, people were looking dead to the world."Those involved were a tiny minority of Dunedin's 22,000 students, most of whom "feel very ashamed about what has happened", he said.

It was too early to say what sort of response would be considered by the city's Dunedin North working party, but "I think we need to look at all sorts of things," the mayor said.

He acknowledged options were limited as it was impossible to stop a law-abiding motorist travelling from Christchurch to Dunedin, but said he wanted "to do whatever is lawfully possible" to prevent a repeat.

Mr Chin also questioned Ensoc's responsibility in organising the event, knowing it was a "drunken pub crawl" that drew the crowds, and described their charitable food drive as "a sop".

"The reality is, it's the event that attracts all these other things that happen. If the event didn't happen, the events that go with it wouldn't happen."

However, Ensoc president Carl Shrimpton, of Christchurch, said while the weekend's events were "disappointing", efforts to encourage good behaviour had worked for Canterbury students entering the rally.

Ensoc had attempted to organise a concert at Dunedin's Edgar Centre, to draw students away from uncontrolled street congregations, but the effort fell flat in August, he said.

Talks had progressed to the point Ensoc was expecting a contract in the mail to sign, but instead got a letter rejecting the proposal, after Edgar Centre staff consulted parties including the DCC, he said.

He rejected calls for the Undie 500's immediate banning, saying any decision would be made after a debrief involving police.

He believed a ban would merely drive it underground, as happened last year.

He agreed a ban would not solve the city's problems and agreed an organised event was needed to keep students occupied and off the streets.

"Until Peter Chin pulls his head out of the sand and realises the city has to manage the event, we are still going to have problems.

Simply saying 'we don't want people to come' is not going to solve it."

He said the Edgar Centre event decision was made by centre management.

University of Otago vice-chancellor Prof Sir David Skegg said the weekend's events were "extremely disappointing", and the Undie 500 "must not occur again".

"The university will take whatever action is possible under its disciplinary powers when those responsible have been identified.

Student behaviour in Dunedin has been excellent in recent months and these deplorable events would not have occurred if the Canterbury students had not gone ahead with their unwanted rally."