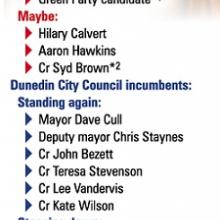 Dunedin Mayor Dave Cull faces a political challenge - possibly from all sides - as the race for the city's robe and chains later this year begins to heat up.

Queenstown businessman and philanthropist Sir Eion Edgar yesterday confirmed he was behind a push to resurrect a Citizens Association-style group that could support candidates in October's local body elections.

The idea had been raised with potential backers in Dunedin and, if confirmed, could see the group's mayoral or council candidates offered financial support by the group, including from interested businessmen, he said.

Sir Eion said he was prepared to help finance the right candidates' campaigns himself, saying the city needed ''good leadership''.

''I would certainly support that.''

At the same time, former Act New Zealand party list MP Hilary Calvert, of Dunedin, confirmed she was also considering an election bid, either by challenging Mr Cull directly or by seeking a seat as a councillor.

That could include forming a group of like-minded candidates to contest the election. Some approaches had already been made, she said.

''If there was a collection of similarly-thinking people, I might hook up with them.

''I'm reflecting on whether it is something I'd be prepared to do.''

Mr Cull told the Otago Daily Times he was only aware of the Greens' pending challenge, but expected others would follow.

''There will be challengers - there always are.''

Mr Cull, who in January announced his intention to seek re-election, said yesterday it was ''likely'' he would again head a Greater Dunedin ticket featuring other council candidates.

Exactly who was yet to be confirmed, but decisions were likely ''in the next month or so'', he said.

However, he fired an opening salvo at those considering a party political approach to Dunedin's election, saying ''there is a view ... loyalty should be to the community and not to a party''.

''The mayor is there to represent the best interests of this community, and I would not want decisions on that to be driven necessary from a national, political basis.''

Councillors remained split over their election intentions yesterday, with more confirming they would stand again but others remaining undecided.

Mr Cull, deputy mayor Chris Staynes and Cr Teresa Stevenson all confirmed in January they would stand again, Crs Neil Collins and Fliss Butcher ruled themselves out and the rest were yet to decide.

Yesterday, Crs Vandervis, John Bezett and Kate Wilson - the latter standing for the last time - all said they would run again, while the others remained undecided.

Cr Syd Brown - a former deputy mayor - remained among the undecided, and would not comment when asked if he would consider a bid to unseat Mr Cull.

Student radio broadcaster Aaron Hawkins, who stood unsuccessfully for mayor and council in 2010, has also been linked to Friday's announcement by the Greens, but he would not confirm his plans yesterday.

Dunedin businessman Ian Taylor was also rumoured to be a possible candidate, but he said from London he was ''definitely not a starter''.

Sir Eion said discussions about resurrecting the Citizens Association remained at an informal stage, but the move was being considered by possible backers he had approached in Dunedin.

He would not name them, or possible candidates, but believed it was important to offer support and allow the council to regenerate.

The association had, in the past, selected and supported candidates' election bids, including financially, but went into recess after each election, Sir Eion said.

The new group, if confirmed, could operate in much the same way.

''The risk is if there's no-one encouraging people, you won't get good people to stand.

''At the end of the day, it's very important for the city to have good leadership.''

Ms Calvert would not identify those she had approached, but believed the council needed ''more sense and rational thought and a few other things''.

She had hoped to find other candidates to stand instead of her, but ''I'm not finding a whole lot of other people standing in a line to do it''.