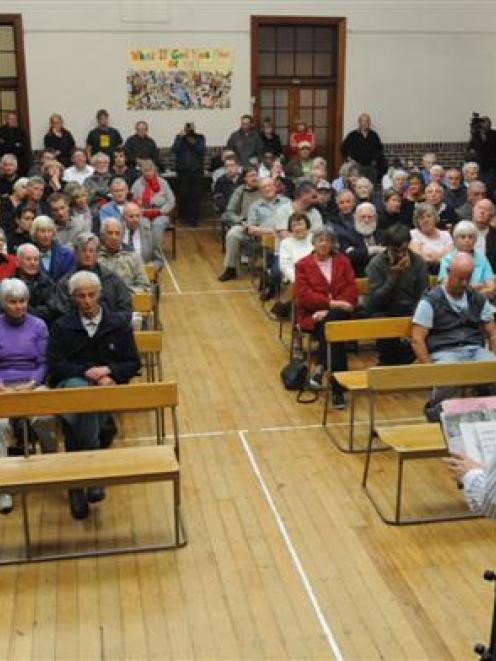 Dunedin city councillor Neil Collins speaks at the Stop the Stadium meeting at the Caversham Presbyterian Church last night. Photo by Peter McIntosh.
A call for the Dunedin City Council to hold a referendum on the Otago stadium issue before the signing of the construction contract was made at a lively public meeting in Caversham last night attended by about 140 people.

Cr Dave Cull agreed to convey the resolution to the council today when it meets to discuss the construction contract, an event expected to be affected by the impact of an application for an injunction to stop the signing which was filed by the Stop the Stadium in the High Court at Dunedin on Friday.

One of those supporting the resolution said a referendum would allow those uneasy about writing documents and terrified of speaking in public a way of getting their view heard.

The referendum resolution was one of two passed by the meeting which lasted more than two hours.

The other asked that the council defer the decision on the stadium until the public had been allowed to make further submissions on the issue to the Long Term Council Community Plan, and that those submissions already in hand be considered as well.

The council is meeting this morning to discuss the construction contract for the Otago stadium, but will have to consider the impact of an application for an injunction to stop the signing filed by Stop the Stadium in the High Court at Dunedin on Friday.

Stadium supporter Cr Neil Collins threatened to walk out of the meeting in its early stages when hecklers interrupted him.

Meeting organiser Tracey Cramptom Smith restored order and Cr Collins remained at the meeting which appeared largely hostile to his stance, although several speakers praised him for showing up.

He did not lose his sense of humour.

When an audience member suggested building the stadium could " end up like the colosseum in the middle of Rome - a ruin and a tourist attraction", Cr Collins thanked him for the suggestion.

"I'll pass it on to marketing".

Cr Collins told the meeting his son with two young children had been laid off at Fisher and Paykel and had little or no future in the city.

The stadium would provide up to 600 jobs during its construction, he said.

Cr Dave Cull was frequently applauded when he outlined his opposition to the project.

He said he would like to see spending on fibre optic broadband in the city to allow for new business development.