Monks in Dunedin protest over Tibet 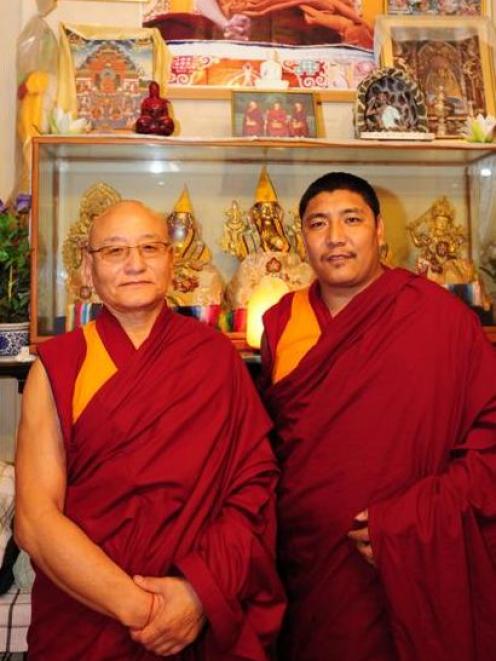 Venerable Geshe Nyima Dorjee (44, right) arrived in Dunedin last night to take up the role of scriptural master at the Dhargyey Buddhist Centre in Royal Tce alongside Venerable Lhagon Rinpoche. Photo by Craig Baxter.
At least one of Dunedin's Buddhist monks will parade blindfolded in handcuffs today during a protest against China's occupation of Tibet.

National protest organiser Thuten Kesang, of Auckland, told the Otago Daily Times yesterday it was the ‘‘moral responsibility'' of all Tibetan monks in New Zealand to join the protest.

Dunedin is home to nine of the country's 30 ‘‘full-blooded'' Tibetans and several are monks connected to the Dhargyey Buddhist Centre in Royal Tce.

Local protest organiser Angela Dempster said Tibetans had been protesting against Chinese occupation since 1959, but this time ‘‘it actually feels like something might change''.

She stressed that Buddhists were ‘‘strongly committed to non-violence'' and it was important that protests were peaceful.

‘‘It's quite hard, really, when you are Buddhist and you know no-one's actually listening because you don't get angry. That makes it quite difficult to get heard.

‘‘I feel it's really a protest to demonstrate the truth behind the extremely confusing issues.''

Protest organisers were being careful to ensure speakers at rallies in Auckland, Wellington and Dunedin spoke only the truth that could be verified, she said.

The Dunedin protest is part of an international protest planned to coincide with the arrival of the Olympic torch in Beijing and begins at the University of Otago at 12.30pm, then in the Octagon at 5.30pm.

- Last night, 200 Tibetan exiles and monks tried to storm the Chinese embassy visa office in Nepal's capital, Kathmandu, but were stopped by police beating them with bamboo batons, AP reported. At least 130 protesters were arrested and there were some injuries.