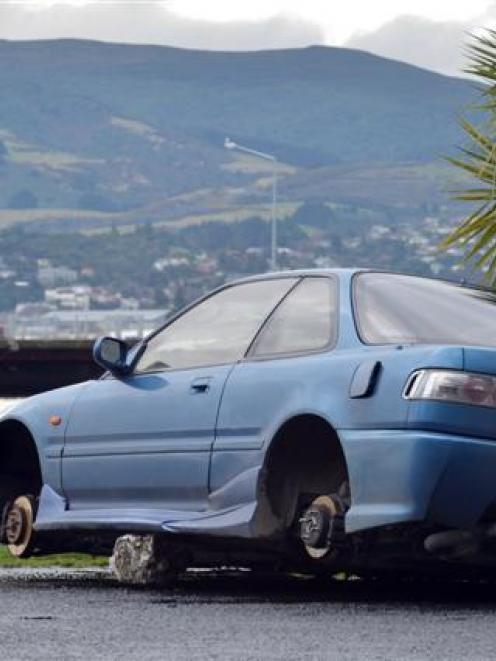 An abandoned car in Bayfield, Dunedin.
Dunedin City Council has taken more action on abandoned vehicle complaints and so reduced the number of vehicles it has to dispose of.

Council figures released under the Official Information Act reveal between 2010-11 and 2012-13 there was a 5% decrease in complaints about abandoned cars (382 complaints down to 364), but a 161% rise in the number of complaints being acted on (44 files initiated up to 115).

The council had started asking owners to deal with the abandoned vehicle themselves before the council acted.

''We never used to do it, but we do now and it has been much appreciated.''

The vehicle owners appreciated the opportunity to dispose of the abandoned vehicles themselves, she said.

Previously, the council towed, stored and disposed of the vehicle, then recovered the costs from the owner.

The vehicle owners also appreciated being able to take advantage of the increase in scrap metal prices.

''The wreckers will pay people good money for the scrap metal value.''

Under the Local Government Act 1974, a council removing a vehicle must store it for 10 days and make reasonable efforts to notify the last registered owner. But if the council was satisfied the vehicle was ''of little or no value'', it could dispose of it without storing the vehicle or notifying anyone, the Act said.