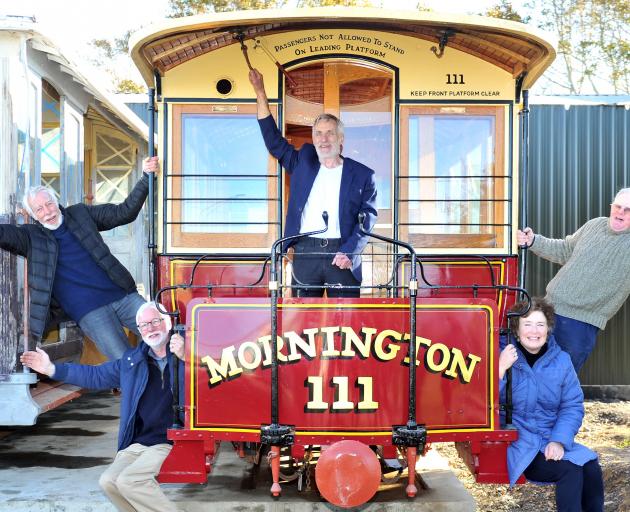 Celebrating the delivery of cable cars to Mornington are (from left) Trevor Goudie, Mac Gardner, Neville Jemmett, Claire Goudie and Stuart Payne. Photo: Christine O'Connor
The dream of a return of Dunedin's High St cable cars came a lot closer to reality yesterday when a crane lowered two cable cars next to a new building on Mornington Park.

The moment was greeted with cheers from a small group of enthusiasts who have worked for years to make it possible.

The idea of the cable cars as a tourist attraction was lauded by an industry figure, but the real work to raise the $23million needed to get them running has just begun.

''That's what I wanted to see on the ground,'' he said as the second car was lowered into place.

The two cable cars were picked up from Ferrymead in Christchurch and transported south by truck.

One was the car that ran to Mornington before the route closed in 1957, while the other, yet to be restored, was used on the Roslyn run. A third was yet to arrive.

Mr Jemmett said the cars, which would be kept in the building recently erected, and rolled outside on display, would be ready for public viewing in two or three weeks.

''This is to show them we really mean business,'' Mr Jemmett said.

''It will be the best tourist attraction Dunedin will have.''

The Wellington cable car was ''extremely popular'' with cruise ship passengers, which suggested the Dunedin venture had great potential.

Mr Roberts said the key was the feasibility of the trust's business case.

To get funding from the Government's provincial growth fund, which the trust hoped to do, its business case would need to show the cable car route would be self-sustaining.

Mr Roberts said having the original cable cars was important to its attraction as a tourism asset.

''This has actually got a connection with history, and people are looking for that.''

''One of the problems we face, though, is they're quite expensive to run.''

He said local government in San Francisco was subsidising the cable car there and was considering whether they were viable.

''I think it would be a tremendous asset - it's just making a business case that's sensible.''