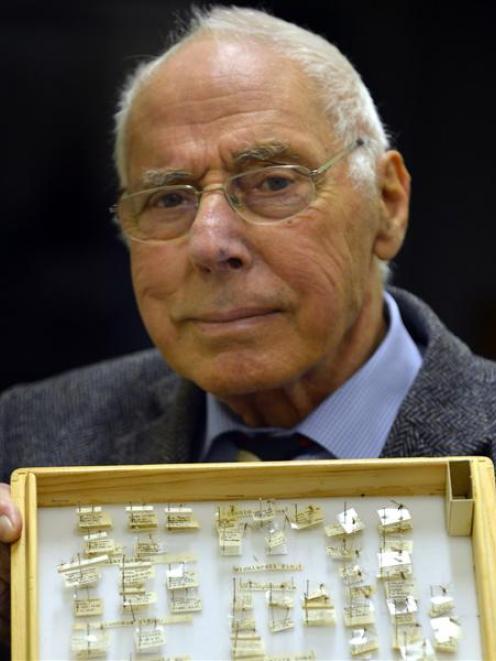 As well as having English medical qualifications, Dr Nye (88) has a PhD from the London School of Hygiene and Tropical Medicine, focusing on a mosquito-linked tropical virus.

And he is an amateur dipterist - a collector of flies - who started collecting mosquitoes as a student in 1946.

The specimens were gathered over about 60 years in England, the Pacific Islands and New Zealand, including some from Otago, museum officials said. Museum research and interpretation co-ordinator, natural sciences, Emma Burns welcomed Dr Nye's gift as a ''fantastic resource''.

Dr Nye said his interest might have been ''stimulated by the well known association between mosquitoes and certain diseases''.

That link had not been fully proven scientifically until about 1897, after the work of researchers Patrick Manson and then Sir Ronald Ross, the latter a Nobel Prize-winner whose biography, Ronald Ross: Malariologist & Polymath, Dr Nye co-authored in 1997.

New species could eventually become established, and the geographical distribution of species within the country could also change.

And if temperatures of about 18degC or higher were sustained for longer, viral replication could increase within mosquitoes, posing greater disease transmission risks.

And the South Island could also be at risk in future, given that mosquito-borne Whataroa virus, which affects birds, had already been detected on the West Coast last century.

Born in Belgium of British parents, Dr Nye spent most of his early adult life in England, moving to Dunedin in 1960.

In 1967, he co-founded the Phoenix Club, a pioneering New Zealand heart health club which promoted the then initially controversial idea of exercise therapy for cardiac patients.