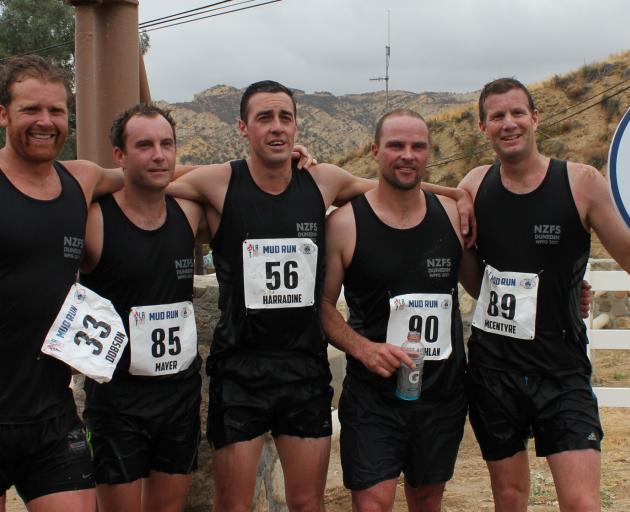 Dunedin firefighters (from left) Joe Dobson, Lee Mayer, Calvin Harradine, Cameron McLachlan and Tony McEntyre celebrate winning the ``mud run'' at the World Police and Fire Games in Los Angeles earlier this month. Photo: Supplied
A pack of Dunedin firefighters has beaten law enforcement and fire service personnel from around the world to win a gold medal in the United States.

Station officer Calvin Harradine, of Willowbank Station, said about 10,000 athletes representing 70 countries competed in the World Police and Fire Games in Los Angeles from August 7 to 16.

The biennial athletic event was open to active and retired law enforcement and fire service personnel throughout the world.

Mr Harradine, who returned to Dunedin at the weekend, said the men competed in three team events and placed sixth in a 10km cross-country run, fifth in the half-marathon and first in the 8km ''mud run''.

The mud run was similar to military training and competitors had to negotiate obstacles such as cargo nets, slides and muddy ponds.

The team had to finish with linked arms and the Dunedin men were first in 37 minutes, he said.

The secret to the win was teamwork and drawing on Mr Dobson's army experience, Mr Harradine said.

''He had a knack for dragging us through. By the end of it, no-one had anything left in the tank; we left it all out there.''