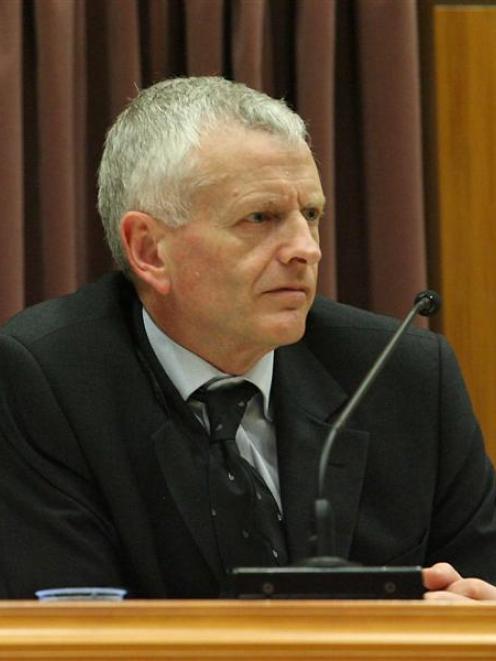 Prof William Robert James Alexander on the third day of Clayton Weatherston's trial for the murder of 22-year-old Sophie Elliott in Dunedin on January 9 last year. Photo The Press.
A senior member of the University of Otago economics department told Clayton Weatherston in 2007 he believed there was little chance of him getting a lectureship with the department.

Weatherston had asked Robert Alexander directly whether he thought his relationship with honours student Sophie Elliott would affect his chance of obtaining the position.

"I told him I thought he had little chance of an appointment and that his relationship with Sophie would make little difference," senior economics lecturer Dr Alexander said.

He told Crown counsel Robin Bates that Weatherston clearly regarded himself very highly as an intellectual.

But he had bad relationships with other members of the department and had accused two senior staff members of plagiarism.

Weatherston had already applied unsuccessfully for a lecturing position in 2006.

He was excessively competitive and Dr Alexander had spoken to him about his attitude in relation to other PhD students.

"He liked to put other people down."

Dr Alexander was giving evidence on the third day of Weatherston's trial for the murder of 22-year-old Miss Elliott on January 9 last year.

She was stabbed or cut 216 times when the accused attacked her in her bedroom the day before she was due to leave for Wellington and a job with Treasury.

Weatherston (33), a former research fellow and tutor in the economics department, admits the killing but denies a charge of murder.

The defence says the pain of the turbulent relationship with Miss Elliott provoked him into losing control.

His trial in the High Court at Christchurch began on Wednesday and is expected to take about three weeks.

As her dissertation supervisor in 2007, Dr Alexander said he met Miss Elliott regularly.

She confided in him some of the difficulties in her relationship with Weatherston, recounting abusive remarks and "put-downs", such as Weatherston saying she was stupid or fat and ugly.

She also said how awful it was to be "put down" in Weatherston's class.

She said when she asked for help, he would not explain things to her and told her she was "pretty stupid" if she did not understand things herself.

Miss Elliott also told him about Weatherston assaulting her on a stairway at the university on January 7, and how he said he wished her dead because she had ruined his chances of a job at the university, Dr Alexander recalled.

His last conversation with her was the day before she died.

She was upbeat, lively and looking forward to going to Wellington for her new job.

But after discussing the job and her good marks, she voiced her concern Weatherston would spread rumours at the Treasury, where he had worked previously.

Dr Alexander said he gained the impression Weatherston had been telling people she was "crazy".

"I told her the people in Treasury would make their own assessment and were unlikely to listen to rumours."

They discussed going to the police but Miss Elliott did not want to, as she was leaving Dunedin.

"I regret not having insisted," he said.

Asked about his attitude to the accused in December 2007, Dr Alexander said that, after reading Weatherston's PhD thesis for which he was one of three examiners, he viewed him as someone who had "gone down considerably in his academic estimation".

He also saw Weatherston as a person "intent on causing trouble in the department".

But he denied a suggestion of "nit-picking" because of the number of changes he wanted Weatherston to make to his doctoral thesis.

And Dr Alexander also rejected a suggestion he tried to prevent Weatherston receiving his doctorate at the end of 2007 by delaying his final assessment of the thesis.

Asked about a March 5, 2007, diary entry in which Sophie talked of "having a crush" on him, Dr Alexander replied, "That would surprise me."