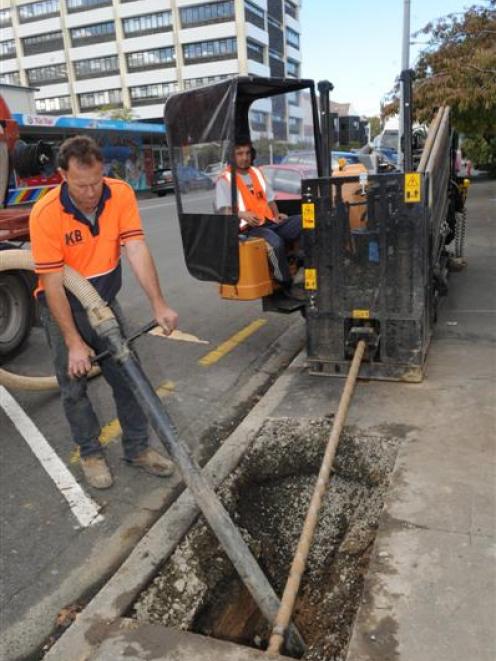 The work is part of the Government's $1.5 billion plan to connect 75% of New Zealanders to the ultrafast broadband network over the next decade.

Chorus spokesman Robin Kelly said work on the first year of the Dunedin programme was well under way, and would continue until June 30, when 1400 homes and businesses - together with 14 schools - would be connected.

The second year of work, from July 1 this year, would cover the central city, South Dunedin, Kenmure and Kaikorai Valley, followed by other outlying suburbs, he said.

Exact details of how much the Dunedin work was costing remained under wraps, and Mr Kelly could not say yesterday how much fibre would be laid in the central city as part of this year's work.

However, the upgrade represented a "massive" network upgrade, he said.

"We're building an architecture that will allow us to meet future capacity." The company was trying to avoid digging new trenches by using existing ducts and other services where possible, to minimise costs and avoid inconveniencing residents and business owners, he said.

That was able to be done in most cases, but new trenches and other work were needed in some areas, he said.

"It's only in those cases where there isn't the existing infrastructure that we will have to physically put it in . . . We want to minimise that as much as possible."

Dunedin City Council transportation operations technical officer Mike Tannock said when contacted the council had fielded only a few complaints from members of the public worried about damage to the streets.

Chorus and its contractor were expected to reinstate streets to their original condition within days or weeks, rather than months, depending on how much work was required, he said.

"On the whole, considering the amount of work that they are doing, I think it's going very smoothly.

"There have been complaints, but I would have thought they were minimal compared to the amount of work that is being done."

Mr Kelly said Chorus was also writing to business owners and residents where work was planned to advise them of the company's plans and the timeframe for work, as well as notifying the public through media advertising.

Customers able to connect to the first stage of the new network would be able to do so from June 30, when it would be ready for use, he said.