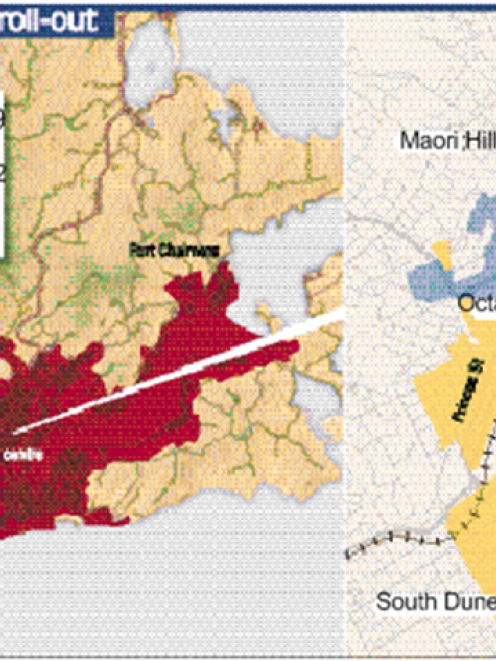 Telecommunications utility company Chorus, and the Government, have been accused of putting profit before people as they begin the roll-out of ultrafast broadband (UFB) in Dunedin.

The inner city will get access to UFB first, with 1400 homes and businesses expected to have the service available this year.

But other areas - particularly lower socio-economic areas - might have to wait up to seven years.

The beginning of the roll-out of the fibre network was marked yesterday by the deployment of infrastructure past the door of the Dunedin Hospital. The health sector is expected to be a major beneficiary of what the network has to offer.

But Dunedin deputy mayor Cr Chris Staynes, who has been working on the city's digital strategy, said there were areas that needed the service more quickly.

Despite Chorus saying it would consult, representatives appeared to have the view that "it was best to do it their way", he said.

The company had given its spiel to councillors yesterday, and Cr Staynes said Chorus had "quite clearly said" the company's policy was to make a point of installing the service in areas where there was demand, and that by doing so, the company would profit.

There was nothing mentioned about Chorus catering to community needs.

There were poorer areas where, if the infrastructure was in place, trusts could then use the high-capacity service to develop free wireless, allowing "so many services to open up" for people who could otherwise not afford to be connected.

The issue was particularly wrong as "this is being funded by the taxpayer," Cr Staynes said.

But Chorus spokesman Robin Kelly responded there was a combination of factors that influenced where fibre should go first.

For lower cost and quicker installation it was important to build on the network of 270km of fibre the company already had in place in the central city.

The Crown required UFB to go to schools, health centres and businesses first.

After that, the company would go to areas of high demand, because if the network had low uptake, the benefits of the service would be missed.

Labour spokeswoman for broadcasting, communications and IT, Clare Curran, said Labour wanted the country to get UFB as quickly as possible.

The roll-out was being done using taxpayers' money, but the company was using it to make a profit.

"That should never have been the intention of this," she said.

"That's why we are so fiercely opposed to the way they [the Government] are doing it."

The announcement yesterday morning was affected by bad weather. Minister for Communications and Information Technology Amy Adams was on a flight redirected to Invercargill and was one of a list of officials who could not attend. Also absent was Chorus chief executive Mark Ratcliffe.

Mr Ratcliffe said in a press release the roll-out was the first step, and the company, which was doing the work along with Crown-owned company Crown Fibre Holdings, would be talking to retail services, who would develop telephone and internet products for people to use bythe end of the year.

Those companies included the likes of Telecom, Vodafone and Telstra Clear.

It was essential for the ability of high-tech businesses to expand and would allow young entrepreneurs to start businesses in Dunedin, and stay here once they had.

Dunedin Hospital chief information officer John Simpson said the Southern District Health Board was "very pleased" with the development, which would help enable a policy to allow people access to their own health records.

A spokeswoman for Crown Fibre Holdings said she expected the service to be provided by telecommunication companies at a similar price to broadband.

It would provide "far faster upload and download at a price comparable to what we have today," and help parents keep in touch with what their children were doing at increasingly computerised schools.

Asked about the criticism, a spokesman for Ms Adams said overseas experience "tells us that the greatest benefits are to be gained from encouraging early uptake by schools, health providers, government agencies and businesses".

"That is why these sectors are the focus of the Government's five-point broadband action plan and are a priority for deployment.

"They are also the areas where the Government has the greatest ability to influence uptake."