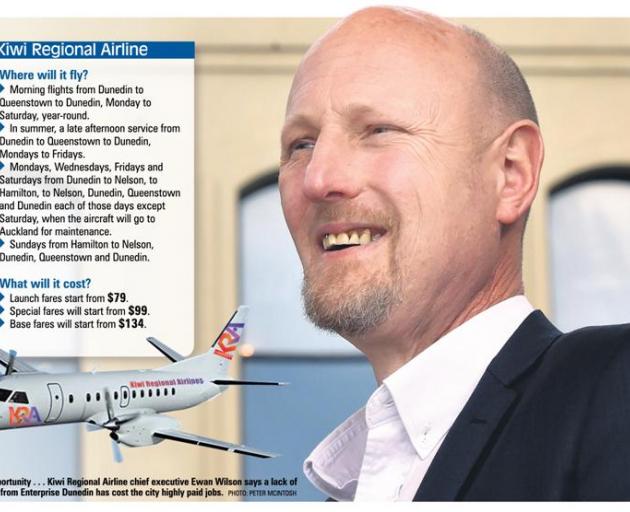 Kiwi Regional Airline has pulled some its planned Dunedin engineering jobs, blaming the city council's Enterprise Dunedin for not providing a $12,000 grant.

But Enterprise Dunedin said while it was supportive of Kiwi Regional Airlines (KRA) and its planned Dunedin services, it was not a grants facility.

KRA chief executive Ewan Wilson told the Otago Daily Times yesterday it had made sense to have the new airline's maintenance performed in Dunedin as its aircraft would be based at the city's airport six nights a week.

But the airport lacked the storage space necessary. A new storage container would need to be added at a cost of about $12,000, Mr Wilson said.

When asked for assistance in setting up that storage container, Dunedin Airport offered KRA free ground rent for a year, and offered to pay for setup costs for water, power, phone and data services, he said.

He then asked Enterprise Dunedin, the council's business development and marketing arm, to pay for the storage container's $12,000 cost but was told no money was available.

''We said you pay it, and it will trigger four highly paid jobs.''

Enterprise Dunedin had told him while it was ''here to help'', there was no money, Mr Wilson said.

''So, the result is instead of grasping an economic opportunity probably worth $750,000 a year to the city, they'll get one and a-half fulltime positions and we'll take the aeroplane away each week to do our maintenance in Auckland.''

Enterprise Dunedin had been ''the most constrained in terms of budget'' of all the comparable organisations around New Zealand, he said.

Enterprise Dunedin economic development manager Des Anderson said there was excitement and support within his organisation for Mr Wilson's plans, and everybody hoped he would succeed.

''But Enterprise Dunedin doesn't have money to invest like that. And I told him that straight up and down.''

Enterprise Dunedin was able to help new businesses by putting them in contact with the right people and working closely with the Dunedin business community, he said.

''And we all want Ewan to succeed. But it's not a grants facility. We do not give handouts to any business.''

While Enterprise Dunedin was tasked with getting ''the best bang for your buck for ratepayers' money'', it was ''not in the business of handing out money for new businesses'', Mr Adamson said.

''Because what we'd be doing is putting ratepayer money at risk.''