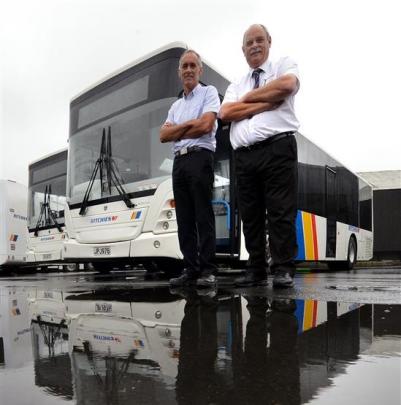 A decision by Ritchies Coachlines Ltd to buy two new buses, valued at more than $1 million, for Dunedin routes is a vote of confidence in public transport's future in the city.

That comment was made this week by Ritchies regional manager Malcolm Budd.

Ritchies Transport Holdings director Andrew Ritchie, of Auckland, would not have brought in two buses, each costing $550,000, if he ‘‘didn't have confidence in public transport in this city in the future'', Mr Budd said.

The low-floor, low-emission Scania buses have already arrived in Dunedin and will run on the firm's Concord to the University of Otago route.

Ritchies was ‘‘experiencing passenger growth'' in the city, particularly on the Concord to university route.

Ritchies would be using the new 45-seater low-floor buses for its Otago Regional Council Dunedin contracts.

The 2016 buses were built by Caetano Ltd, in Portugal, and met the latest Euro V emission standards.

The bus interior was ‘‘of a very high standard'', with easy access through both doors for both walking and wheelchair passengers, and extra space for prams.

Adding the two new buses meant that eight of the Ritchies 12 Dunedin urban buses were less than four years old.

Mr Budd said that more than 10 years ago, it was much more difficult to be confident about the future of the city's public transport and some old, poor-quality buses were running.

But several factors were now generating a much brighter outlook for the city's public transport, including funding through the New Zealand Transport Agency and the new nationwide Public Transport Operating Model.

These developments, and the new buses were ‘‘what Dunedin public transport needs''.

Better public transport ‘‘makes us a more attractive place'' and would encourage more people to shift to Dunedin.