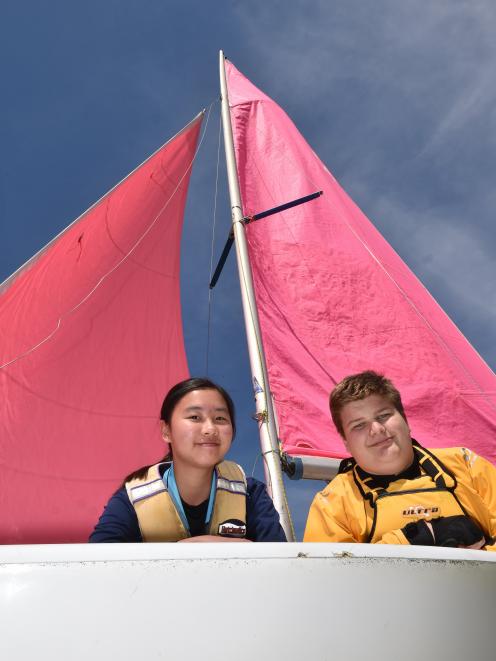 Will Chomchoei (18), an international student from Thailand, and Cole Brooks-Adams (14), from Dunedin, get to grips with a 420 sailing dinghy at the Otago Yacht Club on Saturday. PHOTO: GREGOR RICHARDSON
A group of young sailors in Dunedin already have their eyes on a national teams championship, helped by a fleet of new dinghies.

On Saturday, about 15 young sailors were on hand for an open day, showcasing the new club and its fleet of 420 sailing dinghies.

The club has acquired six of the boats from New Plymouth, helped by the New Zealand Team Sailing Association, and relocated them to Dunedin, where they would be based, Yachting New Zealand regional support officer Ian Gardiner said.

The aim was to promote a new form of team sailing in Dunedin, which centred on short, sharp three-on-three races, using the 420s, Mr Gardiner said.

Each race took just a few minutes, which appealed to a younger generation of sailors, and the 420 dinghies offered a high-octane sailing experience, he said.

If a more traditional type of sailing dinghy, like a Sunburst, was the equivalent of slow-moving station wagon, the 420s were "like your dad's sports car", Mr Gardiner said.

"They are fast and exciting," he said.

The event was normally held in the North Island, but next year it was scheduled to be held at Lake Hood, near Ashburton, in April.

Mr Gardiner said having the event in the South Island made it more accessible for young sailors from the lower South Island, including Otago.

Sailing was in "really good" health nationally and the focus was on ensuring secondary school sailors continued in the sport after they left school, he said.