Coastguard Dunedin president John Campbell was one of two skippers who brought the boat down, leaving Timaru yesterday morning at 7.30am.

The new vessel represented a step up for Dunedin’s coastguard, Mr Campbell said.

It was broad-beamed and stable enough for a helicopter to hover overhead safely during rescues.

It was equipped with thermal imaging cameras to assist in searches.

It had a salvage pump so that if a boat was sinking, the coastguard could pump it dry.

Ultimately, the new vessel could help to extend the range of the Dunedin coastguard’s rescues, he said.

At present, Coastguard Dunedin operated from south of Taieri Mouth to Shag Point, but he believed the coastguard now had the ability to respond to rescues as far north as the Waitaki River mouth, Mr Campbell said. 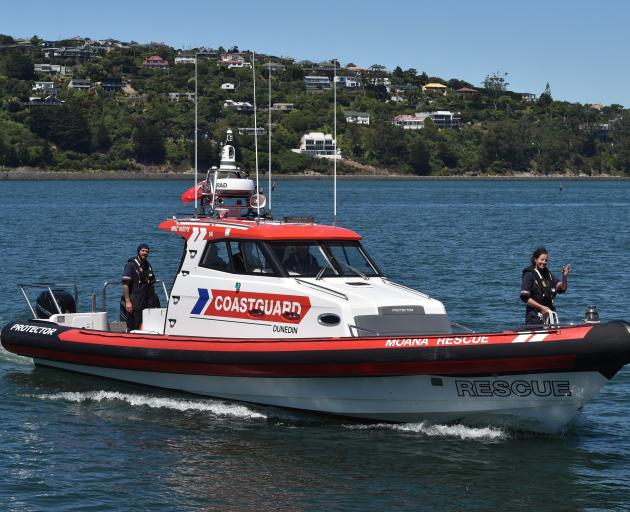 Rachel Johnstone, of Dunedin, waves from the bow of the Coastguard Dunedin's new vessel Moana Rescue as it arrives at its temporary home at the Otago Yacht Club yesterday afternoon. Blair Olsen (in the stern), Barry Harwood (helm), Scott Turner (navigating) and John Campbell (skipper) rounded out the five-person crew which brought the boat to its Dunedin home from Wellington this week. PHOTO: GREGOR RICHARDSON
"It’s got a 300-mile, nautical mile, radius, so bottom of Stewart Island, easy — it’s got the range on it."

The two skippers and three crew then brought the boat home from Wellington, via Kaikoura, Lyttelton and Timaru to Dunedin yesterday.

Before arriving at the Otago Yacht Club the crew stopped at Portobello, where the volunteer coastguard began as Harbour Rescue Inc in 2005, he said.

Moana Rescue is one of 26 new coastguard vessels from a partnership between Coastguard, Lotto New Zealand and Emirates Team New Zealand.

They were built using a $9.8million lottery grant for use at the 36th America’s Cup as support vessels and chase boats.

Coastguard Dunedin spent $35,000 refitting its new boat so it would be capable of coastguard rescue work, Mr Campbell said.

The group’s present boat Dunedin Rescue would now be sold.

The proceeds from the sale would go to fit out the coastguard’s new building in Kitchener St, he said.