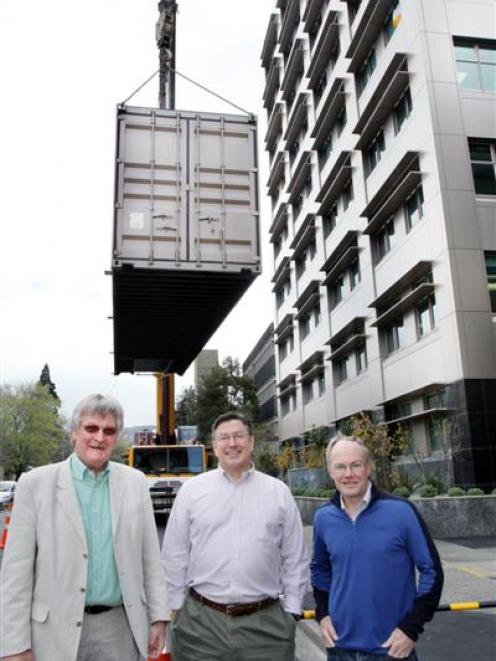 University of Otago microbiology and immunology department head Prof Frank Griffin (left), biochemistry head Prof Kurt Krause (centre) and microbiologist Prof Gregory Cook were on hand when a new state-of-the-art biocontainment laboratory was lifted into position this week. Photo supplied.
University of Otago scientists have made a big advance in their efforts to combat tuberculosis and other infectious diseases by taking delivery of a state-of-the-art containment laboratory.

The three-room laboratory, which cost nearly $1 million and weighs about eight tonnes, was lifted into place on top of the university microbiology and immunology department building by a large mobile crane this week.

It will enable Otago University scientists to pursue advanced research for the first time involving live Mycobacterium tuberculosis and other micro-organisms which cause infectious diseases, at the cellular level.

Tuberculosis kills about two million people a year, mainly in developing countries, and about 600,000 new cases of the disease arise every year.

The laboratory is housed in a container and was recently shipped to New Zealand.

It was funded by Otago University and its purchase resulted from an initiative by the university's Webster Centre for Infectious Diseases, strongly supported by microbiology and immunology department head Prof Frank Griffin and microbiologist Prof Gregory Cook.

Centre director and Otago biochemistry head Prof Kurt Krause said it was "quite a relief" to see the laboratory lifted safely into place on the top of the eight-storey microbiology building.

He was "very, very excited" that researchers would soon be able to use the facility to seek new ways of countering the microorganisms responsible for Tb and other infectious diseases.

Otago University had a "very big programme" involving Tb research, "but a lot of the key research had to be contracted out overseas or to other locations[ in New Zealand]" because the requisite facilities had not been previously available in Dunedin, he said.

The laboratory, one of only about four in the country, is due to be commissioned in December.

It will be used by Profs Krause and Cook, other Otago scientists, and some researchers from elsewhere in the country.