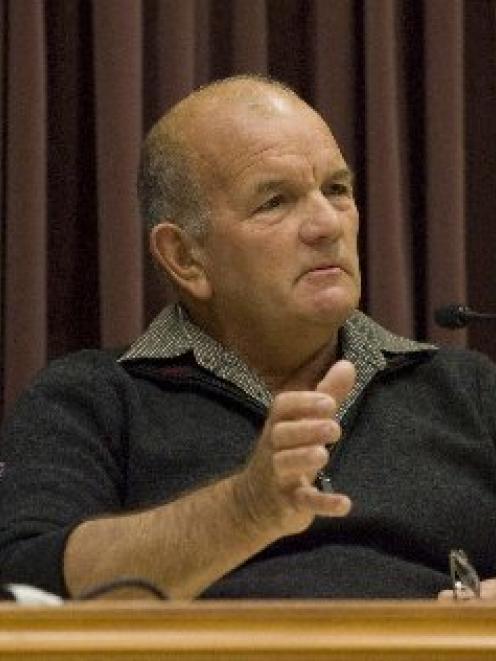 Graham Letts gives evidence during the retrial of David Bain.
David Bain's paper round may have been done fast and early on the morning his family were later found dead at their Dunedin home, Crown witnesses said yesterday.

A series of customers on his paper round gave evidence about their sightings of him, and the timings, during the 28th day of the murder trial before Justice Graham Panckhurst and a jury.

Sergeant Trevor Thomson, who was a detective constable at the time of the murders in 1994, gave evidence of timing an officer doing a fast-jog run of the paper round.

The officer had no papers in the bag he was carrying.

He acknowledged that the test runs were done in daylight in April, while Bain's paper round on that morning would have been done in icy cold, darkness, and with a dog, and carrying up to 50 newspapers at a time.

The Crown alleges Bain used his paper round as an alibi, but that he did it quickly on the morning of the murders to return home before his father got up.

A resident, Douglas Richardson, saw Bain doing the paper round with the dog between 6.18am and 6.22am that morning.

Malcolm Parker said he had his paper at 6.35am that morning.

This was at least 10 minutes before it usually arrived, he said.

Graham Letts normally saw Bain in Every St on his way to work soon after 7am, but did not see him that day.

He also said he had been on a school board of trustees with David Bain's father Robin, who the defence accuses of being the killer of the family.

He said Robin Bain was a quiet, passive gentleman, level-headed, who did not talk much.

When Robin Bain said something it was "profound", and he put humour in it, Mr Letts said.

He also recalled Robin Bain giving someone at a meeting a lecture when they tried to kill a bumble bee which had flown into the meeting room.

He described Robin Bain as "a real pacifist".

Sgt Thomson told the court he was the exhibits officer at the time of the killings in 1994 for the scene at Every St. He was in the bedroom of David Bain's brother Stephen when the lens from a pair of spectacles was found.

The Crown alleges the glasses had been worn by David, but the defence has alleged the lens was planted there by former police officer Milton Weir.

During cross-examination, defence counsel Helen Cull QC questioned Sgt Thomson about the lens, but said that the allegation of planting evidence was not against him.

She told him he was "in the clear", and he replied, "Thank you."