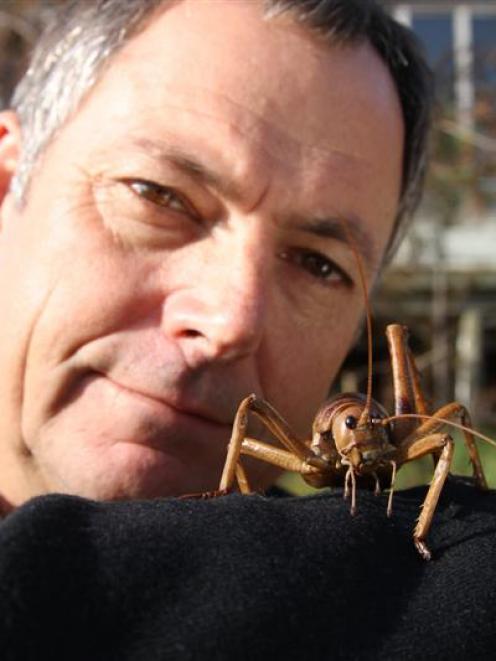 Presenter Peter Elliot holds a giant weta which this month will feature in the TVNZ documentary, <i>Primeval New Zealand,</i> which was produced by the Dunedin-based company NHNZ.
The work of Dunedin-based television company NHNZ will feature on New Zealand free-to-air television this year, with a documentary on the mysterious origins of the country's animals to screen this month.

The documentary Primeval New Zealand will screen in primetime on TV One, following a successful pitch to the network and New Zealand on Air last year.

Executive producer and writer Judith Curran said it had been a few years since the company had a documentary on TVNZ. The six-part series Wild at Heart is also scheduled to screen this year.

During 2009-10 the company produced the international series Life Force for Discovery Science, NHK in Japan and France5, which included an episode on New Zealand.

"It was the story of evolution, and how animals evolve the way they do because of the geographic events that happen, and the story of New Zealand is quite extraordinary."

More than 200 hours of footage was compiled for the series, and the company was able to use its "incredible archive footage" to produce the TVNZ-commissioned documentary, which is fronted by Peter Elliot.

While the company produced many documentaries for American or overseas audiences, it was nice to be able to write a documentary for a New Zealand audience and "have it presented with a Kiwi accent".

While tight-lipped over the revelations in the documentary, she confirmed it contained the science behind where "many of our iconic animals originated, but need I say more".

"The Kiwi audience will be shocked by what they learn in this show."

Primeval New Zealand will screen on TV One on January 17 at 8.30pm.