A 'nightmare' waiting to have collapsed buildings demolished 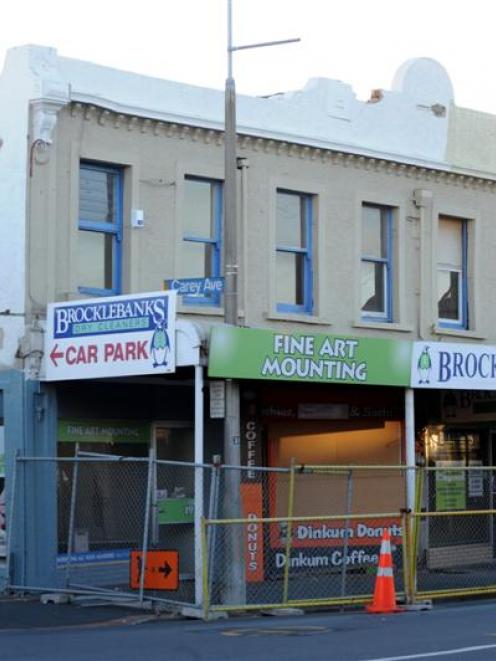 Lincoln Darling, owner of the Barrons Building in Rattray St, which partly collapsed in January last year, said yesterday he "didn't realise there was so much red tape involved" in demolishing a building.

Norma Brocklebank, co-owner of the Brocklebank Dry Cleaners building in King Edward St, South Dunedin, said yesterday waiting so long to demolish her building when its facade was ruled almost a year ago to be in immediate danger of collapsing and the building condemned had been a "nightmare".

Demolition consents are in place for both buildings.

Because the Barrons Building shares a wall with its neighbour - the N & ES Paterson building, owned by the Scenic Circle Hotel Group - that building will be demolished, too.

The Barrons building was built in 1876 and the Brockle-bank building is believed to have been built in 1881 by building contractors Millington Bros.

All three buildings remained fenced off but largely intact yesterday. The roof, one storey and some unstable adornments on the Barrons building were removed last year.

Because of factors including their location and age, the owners have needed Dunedin City Council resource consents and building consents, as well as Historic Places Trust archaeological reports.

Mr Darling and Scenic Circle Hotel Group director Stuart McLauchlan said yesterday the demolition of their buildings was imminent. A contractor had been given the go-ahead to proceed and demolition could not happen soon enough, Mr McLauchlan said.

"No-one thought it would take this long. I didn't realise there was so much red tape involved in demolishing a building," Mr Darling said He would not say how much he had spent so far on the demolition process but said it was "more than the building is worth". 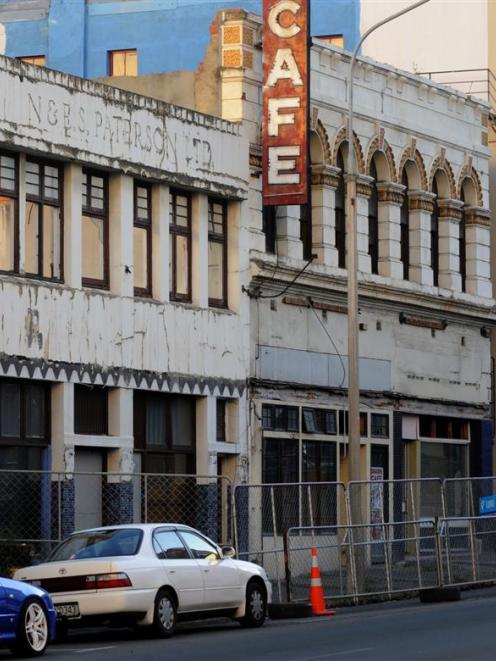 The adjoining N & ES Paterson and Barrons buildings in Rattray St, central Dunedin.
The property has a current land value of $170,000, and the value of improvements is listed as zero.

The Brocklebank building, which houses four shops, was bought by Cyril and Norma Brocklebank 56 years ago and was now owned by a family trust, Mrs Brocklebank said.

Their son Roger continues to operate the dry-cleaning business from a building at the rear of the condemned building.

Although consent had been obtained for demolition, the trust wanted to rebuild on the site immediately and was waiting for the necessary consents for that, Mrs Brocklebank said.

Because the site is in a townscape precinct, both building and resource consents are required from the city council to rebuild.

No consents have been lodged yet.

"It's been a nightmare. Almost a year later and we still have a condemned building ... The tenants have gone and we have had no income since July. In the meantime, we have costs - rates, insurance, archaeology assessment fees, builders, engineers, scaffolding and fencing."

"We never imagined it would take this long. We are only a small business ... and I don't think the council realises this has had a big effect on us."

The Historic Places Act requires an archaeological report to be carried out before any building built before 1900 is demolished.