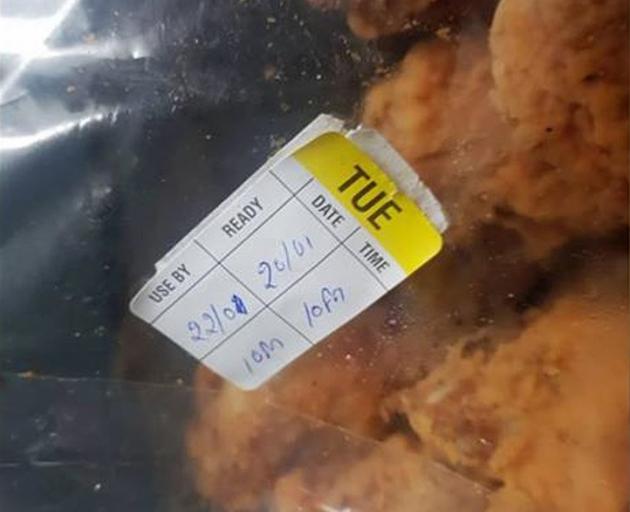 A bag of chicken at a Dunedin Pizza Hut which allegedly had a new expiry plastered over the old date. Photos: Hayley Bevin
Restaurant Brands says a government inspection of its Dunedin Pizza Hut stores after allegations of "disgusting" practices by a franchise owner identified "no critical food safety risks".

This comes after three Dunedin employees of the chain resigned in protest of actions the local franchise owner who allegedly served expired food which had been thrown in a skip, extended expiry dates of chicken and seafood, and refused to fix a broken mixer which leaked engine oil into dough.

The franchise owner has denied the claims.

Restaurant Brands general manager of marketing Geraldine Oldham said in a statement this morning the Ministry of Primary Industries visited a Dunedin store yesterday in relation to the allegations.

The ministry advised there were no critical food safety risks or concerns identified, she said.

"The issue regarding fraudulent 'use by dates' was also followed up, and no evidence of this was identified during the inspection. Our Quality Assurance team is continuing to work with the franchise team and MPI on any follow up."

Restaurant Brands was aware of the issues raised and its was working through them as a "matter of urgency", she said.

The ministry has been contacted for comment regarding the inspection. 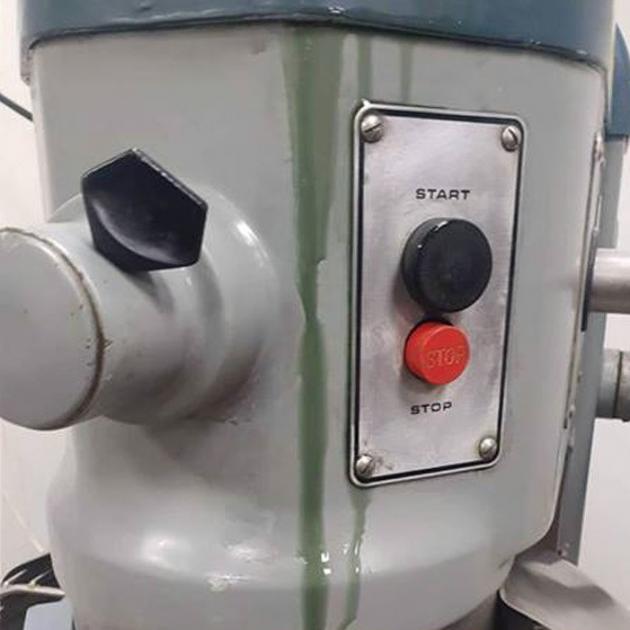 A dough mixer leaking oil.
One of the former employees who raised issues was Hayley Bevin (26).

She quit her job of seven years at Pizza Hut in Dunedin about three weeks ago after what she describes as a series of ''disgusting'' actions by the franchise owner.

Dunedin has two Pizza Hut stores, one in Hillside Rd, South Dunedin, and another in Great King St, North Dunedin.

Naveen Malhotra took over the two franchises of the chain about three months ago, and the hygiene and staff treatment ''kept getting worse'' after that, Ms Bevin said.

He extended best-before dates on food, including chicken and seafood, she said.

The workers were told to use ''disgusting, crusty'' expired dough.

He also refused to fix a mixer which was leaking oil into dough, she said.

The last straw came when expired brownies which she had thrown in the skip were put back in rotation, she said.

''I came back on Monday and they were in the chiller. I knew it was the same packet, because I took a photo of it before I left.''

She wanted to warn the public about the practices there.

''I don't want my friends to buy from there and get sick.''

When Ms Bevin resigned, she and two other employees had a meeting with the area manager about the issues and were told they would be investigated.

About two weeks later, she had not heard anything.

Nikita Lloyd (20), who worked at Pizza Hut for four years, left her job at the South Dunedin franchise last week.

''It's just disturbing. I hope my family doesn't go there to get food poisoning.''

She recalled one instance when she wanted to dispose of chicken wings which expired that night.

The duty manager called the franchise owner, who instructed them to put the bag back in the fridge and change the expiry date.

They were used the next day, she said.

In another instance, frozen shrimp were thawing in hot water in a container and had partially cooked and were later put back in the chiller.

Her friend at the North Dunedin store recounted a similar story in which they could smell the expired shrimp, but it was still put on a pizza, she said.

''I just hope something is done.''

Former employee Cory Cairns (21) said he had seen incidents such as the other two described.

He also recalled an instance when Ms Lloyd received a warning because she argued against using red capsicum, which had fallen on the floor, on a pizza.

The franchise owner, Mr Malhotra, who said he was overseas, denied the claims.

The staff left because of ''roster problems'', he said.

He did not want to comment further and referred questions to head office.

A Dunedin City Council spokeswoman said it received a complaint about the restaurants on Saturday.

It was referred to the Ministry for Primary Industries, as Pizza Hut chose to be registered through the ministry rather than the council.

A big thank you to the 3 brave staff members who put the health & welfare of customers before their paychecks!

Businesses may 'choose' to be registered with a Govt department, but a potential Public Health issue should be investigated by Council.

Not critical? I'm beginning to think our appalling rates of food related illness in NZ might be, at least partially, explained by the casual attitude of the regulators!?

I would prefer hearing the Ministry of Primary Industry response to the allegations. As the Restaurant Brands, are in the end trying to protect their best interests.

If I was a Pizza Hut purchaser I would certainly feel safe now that a post allegation inspection has turned up nothing out of the ordinary - NOT. I hope for the sake of Pizza Hut customers that if the original allegations were true that the owner has now had a scare and practices will change.

They found no issues probably because the owner had them all cleaned up before inspection.

Good to see this establishment closed today.DCC Health should be allowed access before they reopen.

If anyone has any sense they won't go near the place. Bravo to the staff who spoke out. That takes courage and they wouldn't have done it lightly. No-one is fooled by the fact the inspection found nothing much.