The former Forbury Park racing venue in Dunedin lies unused amid negotiations about future use of the site. PHOTO: GERARD O’BRIEN
Dunedin is out of the running for any new facility designed for harness racing, the Forbury Park Trotting Club has been told.

Efforts to secure a long-term home at an upgraded Wingatui venue with the Otago Racing Club also seem destined to come up short.

"There will be no new harness racing track in Dunedin to replace the Forbury track," Forbury Park Trotting Club chairman Craig Paddon said.

The club has been negotiating with Harness Racing New Zealand since Forbury Park became surplus to the industry’s requirements in August last year.

Mr Paddon said the negotiations were about both the planned sale of the 12ha park at St Kilda and what would happen to sale proceeds.

A result could be achieved this summer.

The national body would not sanction spending on a new track in the Dunedin area, Mr Paddon said.

However, the club had continued to advocate for proceeds from the planned sale of Forbury Park to be invested in Otago or Southland.

Two Forbury Park Trotting Club meetings are scheduled to be run on the grass at Wingatui this season, but hopes of a large capital injection into a combined facility there have faded.

New Zealand Thoroughbred Racing chief executive Bernard Saundry said the body had not been drawn into discussions connected to the Forbury Park Trotting Club and it was focused on other issues.

Otago Racing Club chairman Murray Acklin said the club at Wingatui remained open to an agreement that could benefit both clubs.

However, the racing club did not want to give up land at Wingatui or an ownership stake at the venue. 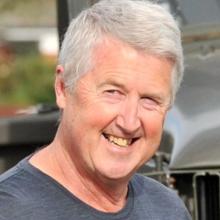 Craig Paddon
When it was operating, Forbury Park was marketed as having the fastest sand-based surface in New Zealand.

Lack of such a track is expected to be an impediment for attracting quality fields to race meets in the years ahead.

It is understood lack of horses and trainers in the Dunedin area is a significant barrier to investment in facilities.

Efforts to contact Harness Racing NZ yesterday to confirm this were not successful.

Taieri MP Ingrid Leary said the prospect of a new harness racing venue in the Dunedin area had always seemed a long shot, but a joint venture at Wingatui had appeared to be an opportunity worthy of consideration.

She remained optimistic the Forbury Park site would benefit the city once its future had been confirmed.

A housing development was one idea on the table.

There are also high hopes the site will be useful for helping the low-lying South Dunedin suburb adapt to climate change.

Ms Leary said people had backed trotting in Dunedin over many decades and they would want their investment to be respected and for future community benefit to be kept in mind.

An auction of Forbury Park chattels at the end of last year grossed about $120,000 for the club.

Tables and chairs were among the items still needing a home.

So the Forbury Park trotting club management decided to close the site and sell it off without getting any commitment to build an alternative. It is astounding that the return on the assets will be ferreted away into some project to no doubt support racing in Auckland.
I can only hope the Forbury Park committee members are suitably embarrassed.

That's right Dunedin let's keep going backwards. Close down two Warehouses, a Kmart, and trotting club so eventually we all pack in at one place like sardines. Spot on!

National retail franchises and Harness NZ are not 'Dunedin'.