Not a 'shred' of evidence Robin killer: Crown 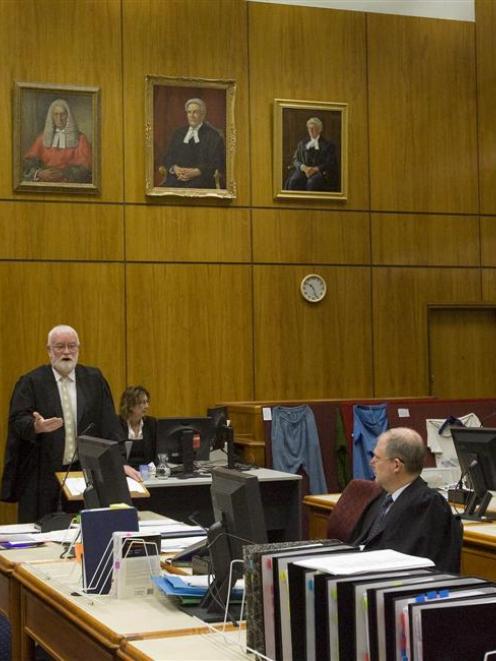 Kieran Raftery QC delivers his closing of the Crown's case in Christchurch yesterday.
There was "not the slightest shred of forensic evidence" linking Robin Bain to the murders at the family's Every St home on June 20, 1994, the Christchurch jury hearing David Bain's retrial was told yesterday.

In a closing speech summarising 12 weeks of evidence, Crown counsel Kieran Raftery said the question for the jurors was the same as that posed by Justice Williamson to the jury at Bain's first trial 14 years ago "Who did it, Robin Bain or David Bain?"

And Mr Raftery said the forensic evidence in the case proved it was 37-year-old David Bain who shot his parents, two sisters and younger brother, then set the scene to "frame" his father.

The defence said Robin Bain was responsible, his motive being he was in a downwards spiral of depression and about to be exposed for an incestuous relationship with his younger daughter Laniet, but there was nothing to link him to the killing of his wife, two daughters and younger son.

Laniet was the source of information about the alleged incest and was "hardly reliable", Mr Raftery said.

From what she had told various people, by the time the family returned to New Zealand from Papua New Guinea in late 1988 when she was 12, Laniet had had three children to three different men and also had an abortion.

"If the Crown were to prosecute Robin Bain for incest on the basis of Laniet's accounts, we wouldn't have got past first base," Mr Raftery said.

Nobody else had said independently Laniet had been pregnant and David Bain had told a family friend it was "nonsense".

Defence counsel Michael Reed QC had said it was unimportant whether the incest was true or not, that just the fact of Laniet saying it, was the trigger for Robin Bain to commit suicide and to murder as well.

But Mr Raftery asked the jury to remember Laniet mentioned the incest to two dairy owners, yet had not mentioned it to her doctor.

As a historian of incest, Laniet was "very unreliable", Mr Raftery said. And he reminded the jurors of the comment by the "missing Mr Cottle" who met Laniet three days before the killings and was surprised she was living with her father at the schoolhouse at Taieri Beach.

Another witness had mentioned hearing a female voice in Robin Bain's van sometime in 1993, but Laniet was not living at Taieri Beach until April, 1994.

As to whether Robin Bain was depressed, Mr Raftery said there had been no evidence from any clinical psychologists or psychiatrists. And what had been said about depression was at variance with the regular letters he was writing to his mother in the months before his death.

Mr Raftery also asked the jury why David Bain was "the only one who deserved to stay" in the words of what the defence says was a suicide note left on the family computer by Robin Bain.

The supposed suicide note had more to do with David Bain than Robin, Mr Raftery said.

David Bain no doubt thought he was "the only one who deserved to stay", but did Robin Bain think that? The message was a "get out of jail free" card for David Bain rather than the act of a man trying to explain why he had killed his family and himself. It "did not quite gel" and was "inadequate" as a suicide note, Mr Raftery said.

And he asked why the others had to be murdered. Robin Bain was proud of his children and what they had achieved. Even if he had been driven to suicide by what the Crown said were flimsy claims of incest and depression, there was no explanation for him turning into a homicidal maniac, Mr Raftery said. There was "absolutely not a shred of evidence" to link Robin to any of the murders.

The bloody sock prints were made by the murderer - the defence say by Robin whose foot measured about 270mm but the Crown says by David.

Although the prints were 280mm in length and David Bain had a 300mm foot, Mr Raftery reminded the jurors that former ESR scientist Peter Hentschel who tested the prints described both complete and incomplete prints.

Mr Hentschel knew better than anyone what those prints he saw represented and, to him, "they represented footprints of someone with a larger foot", Mr Raftery said.

The other point heavily relied on by the defence was the computer switch-on time which they say gave David Bain had an alibi as he was still out on his paper round.

But the evidence of forensic computer expert Martin Kleintjies showed the computer would have been switched on somewhere between 6.40am at the earliest and 6.46am at the latest.

And Mr Raftery asked the jury why a man who had committed four murders and was about to commit suicide, knowing his son was about to walk in at any time, would waste time waiting for a computer to warm up so he could write a suicide note.

He then stopped speaking for 44 seconds, the time Robin Bain would have had to wait if he was the person who typed the message on the computer.

"It's a hell of a long time," Mr Raftery said. And he said while it was physically possible for Robin to have shot himself, it was highly unlikely according to the pathologists.

The defence said Robin Bain's invariable morning routine was to get up at 6.30 and go directly into the house but there had been no evidence that was the case.

If Robin Bain was going to commit four murders, leave a suicide note then shoot himself, he would need to have been up earlier than 6.30. The killer did not envisage the delay in Stephen's room, that he would have to fight him before killing him.

An odd thing was the radio was on in Robin's caravan when police checked it and he had brought in the newspaper "an odd thing for someone who's going to commit murder".

Mr Raftery also asked the juror to remember the amount of blood in Stephen's room. The killer had to strangle him to incapacitate him and left blood from a loose weave jersey on the door frame. There was blood everywhere yet Robin Bain had no blood on him apart from his own.

It suggested he had gone back to the caravan to put on a clean set of clothes before committing suicide. And that he put the bloodied garments in the laundry for David to wash when he returned home.

There could be no other explanation if Robin was being to be looked at as the murderer, Mr Raftery said.

"What on earth are the gloves for if you're going to commit murder then suicide and tell the world David 'deserves to stay'," Mr Raftery asked.

"You're announcing you've committed the murders then suicide but the murderer needs to hide his fingerprints."