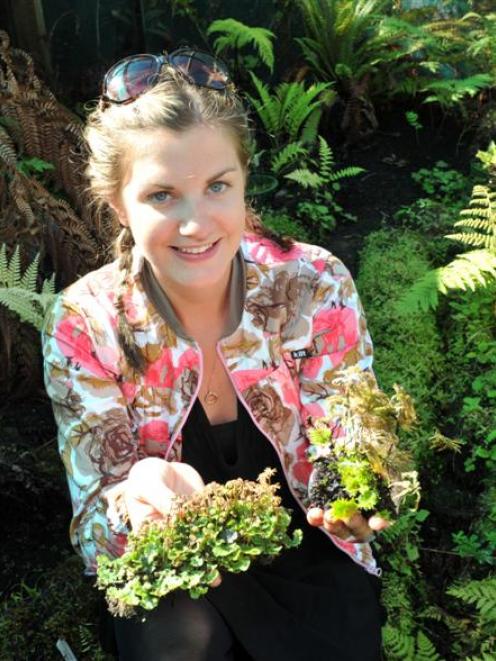 University of Otago postgraduate wildlife management student Kelly Frogley (23) holds samples of liverwort (left) and umbrella moss. Photo by Gerard O'Brien
A rolling stone may gather no moss, but University of Otago moss researchers are clearly on a roll when it comes to gathering national botany prizes.

Kelly Frogley recently became the third Otago University student in a row to win the same prestigious national botany award, which is presented at the annual John Child Bryophyte Workshop.

Bryophytes are a group of small, non-woody plants, including moss, liverwort and hornwort.

Miss Frogley late last year won the "Tom Moss Student Award in Bryology", including $400, for the best student contribution to New Zealand bryology, after giving a research-related talk at the international bryophyte workshop at Matawai, near Gisborne. Her talk focused on botanical field work she had taken part in at Forest and Bird's 550ha Lenz Reserve, near Tautuku, in the Catlins, last year.

Miss Frogley had felt "quite nervous" before giving her talk and the unexpected prize had been "a great honour".

She needs no convincing that "small is beautiful" when it comes to plants.

Because bryophytes made up such a significant part of New Zealand's flora, it was surprising that "not much work" had been done on these important plants.

Miss Frogley hopes to present her bryophyte research at an international conference to be held in New York later this year.

Otago botany department Teaching Fellow John Steel said that although bryophytes were often overlooked in favour of larger plants, New Zealand was actually home to about 12% of the world's overall bryophyte biodiversity.

And bryophytes played important ecological roles, including helping to retain water, and beginning to recolonise exposed rocky areas for eventual use by other plants and small animals.

The success of the three Otago students reflected the strength of bryophyte studies at the Otago botany department, he said.

- The late Tom Moss was an active member of the Wellington Botanical Society and took part in the first John Child Bryophyte Workshop in 1983.