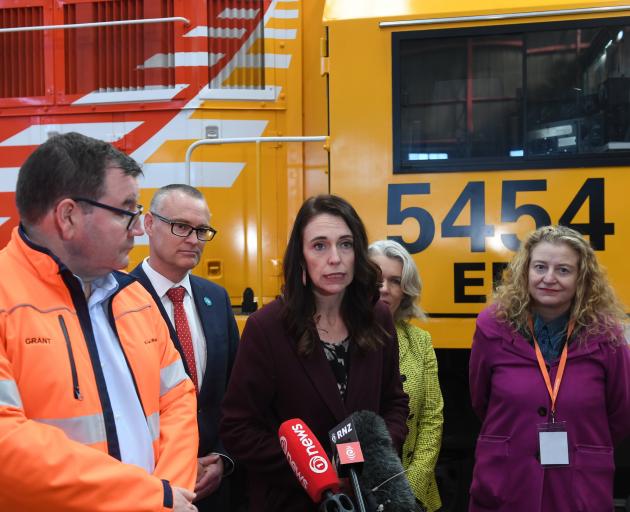 Budget 2021 included $85million for KiwiRail to reopen the century-old workshops.

The facility, which once employed 1200 people, was essentially scuppered in 2012 and reduced to a staff of 27.

The funding will allow Hillside to assemble 1500 railway wagons, despite protests from officials who warned that local assembly was costly and risked delays.

Papers obtained by Act New Zealand under the Official Information Act show KiwiRail officials were sceptical about the merits of re-establishing the workshop, saying the bid was "not supported" by the Ministry of Transport.

Instead, the officials acknowledged the choice to reopen the workshop was a political one, based on Labour’s desire to fulfil a manifesto pledge to reopen Hillside Workshops.

"This bid is not currently supported by the ministry.

"We consider that given the significant constraints on the Budget allowances and the higher priority of other ‘Future of Rail’ bids that it is not a priority to progress at this time," officials said.

The Treasury was also against the bid, recommending it receive no Budget funding.

KiwiRail warned assembling the wagons at Hillside would cost 30% more than "existing wagon procurement practice" based on its cost estimates.

According to a redacted section of the briefing, the text of which was revealed using a "copy and paste tool", the recommended prioritisation of rail funding in the Budget was $771million for the National Land Transport Fund to be spent on rail, $197.9million in capital for resilience and a further $1.27billion in capital for new rolling stock and mechanical depots.

All those bids were whittled down by about $800million.

The NLTF injection was $300million less than what was requested, the core asset spend was trimmed by $100million and the investment in rolling stock was culled by $500million.

The Hillside investment, however, came through the Budget process intact, with every dollar requested being allocated in the final budget.
Hillside was also the beneficiary of a $20million cash injection from the Provincial Growth Fund to establish a mechanical workshop.

Act transport spokesman Simon Court said the advice showed the Hillside project was "a political decision and not based on sound economic advice".

He called it "cynical".

"New Zealanders are asking their Government ‘when are you going to actually build infrastructure we need, rather than this series of political vanity and vote-buying nonsense projects?’," Mr Court said.

Transport Minister Michael Wood said the facility would "bring back good, high-paying engineering jobs in Dunedin after the last government shut the workshops down".

"We believe that the investment stacks up when these wider benefits are considered and I note that we carefully made the decision to proceed with local assembly, but not full manufacture."

According to the briefings, KiwiRail reckons it can have the first wagons running off the assembly line in two years.

That delay means KiwiRail will still have to import 780 wagons needed to maintain freight services before it is in a position to build its own.

The Budget bid only provides for the assembly of wagons at Hillside.

Officials briefly considered re-establishing a foundry at the site, to build the wagons almost entirely, but this was ruled out as being too costly — as much as $400million — and because KiwiRail no longer has expertise in this area, making it risky.

Officials also said even a local foundry would rely on some imported parts from overseas and it would be four years before the first wagons entered service.

KiwiRail hoped wagon assembly itself would create 45 new jobs, with 10% of them apprentices.

The briefing noted that around 910 "niche engineering and manufacturing industry jobs" had been lost in Dunedin in the past decade.

State Owned Enterprises Minister David Clark, who is also MP for Dunedin, said that "for more than 100 years, Hillside Workshops has been a cornerstone of Dunedin’s strong manufacturing economy".

"In choosing to assemble at least 1500 wagons at Hillside, this Government is investing directly in local engineering jobs, rebuilding expertise and boosting Otago’s economy as well as making our railway more self-reliant.

"Opposition parties want to see the domestic rail industry and its people derailed once and for all.

"Meanwhile, this Labour Government is committed to getting it back on track," he said. — The New Zealand Herald

Article translation:
Labour lied again and pulled wool over everyone's eyes to buy votes in Dunedin, which is waste of time as Dunedin is redder than blood.
You know that both are true, especially when every department says NO.
When will foolish people open their eyes....

Only the ideological or Calvinist would look Provincial largesse in the mouth.

Another failure from this Labour Government.
No thought or foresight is costing the New Zealand tax payer billions of dollars.
Thankfully an election year is coming.
It will take more than a wedding to blindside the voters.

Nasty oik, aren't you? The wedding is not a stunt, but folk like you would deny the PM her day.

"Officials" also managed to persuade a National Government to buy Chinese Loco's, carriages and rolling stock for the Auckland railway network and others around the country ... basically a disaster due to build quality which meant faulty brakes & bearings that overheated and failed, and general quality was so poor that they were repaired under warranty by NZ tradesmen who actually knew what they were doing and saved the taxpayers millions.

I don't know where these "Officials" are getting their information from, but I certainly have doubts as to whether they have ever been closer to a train than the wind-up one there parents bought them for Christmas when they were 5 years old ... they haven't progressed very far and I'm ashamed that they're not supporting NZ industry which is proving to world leading in many areas and has real long-term expertise in train manufacture and maintenance.

It really does make me wonder what sort of bonuses these people get and from who to give this sort of "advice" to government ... but that's only my opinion !!

BUY & BUILD KIWI MADE !!! I hope Jacinda and her team will take a very close look at the "officials" and their reasoning.

Thank god ACT are nowhere near the levers of power.
Otherwise you'd be having to move to China to get any job that wasn't purely in retail !

Act and Rail Transport ?......definitely no common ground there. They are more interested in Road Transport (and the associated powerful lobbyists) and heavy truck and trailers with their attendant heavy fuel usage/road damage !

Rail is absolutely the most fuel efficient means of transport.

As for the "Officials" and costs ? I wonder how they accepted the Chinese made product...with associated faults : Asbestos, Braking, Breaking, etc etc;

Are they still employed by Kiwirail? Why ? And why give any credence to any of them. Good Onya Labour Michael Wood

Great decision that will in decades to come prove it’s worth. Another example of the value of something exceeding its cost.

It is always interesting to compare the rhetoric of "we must always buy the cheapest option" to the real cost to buying junk from cheap overseas suppliers.
How many stories have we had just on railway purchases over the past 10 years where what was bought was not what was delivered?
What was the full real cost of chinese locos packed with asbestos? Someone paid for the temporary underpaid chinese workers who were sent to do the job of asbestos removal. How much money did Kiwi rail lose due to the nonavailability of those locos for only a year or three.
What about the cost of replacing the dodgy bogies and brakes of the big batch of wagons, again bought from China?

Assembling wagons in NZ may help identify and alleviate the low quality issues of imported wagons before they hit the rails. And even ifno faults are found, at least we have a handful of people in work for a while - that can't be all bad.