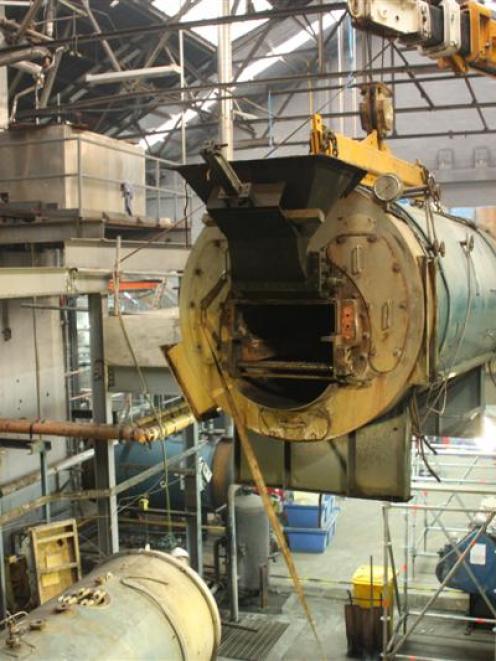 One of four coal boilers is lifted out from the Speight's Brewery on Tuesday as part of the brewery's $29 million redevelopment. Photo by Tim Miller.
The removal of four old coal boilers from Speight's Brewery this week could serendipitously solve a heating headache for the Dunedin Gasworks Museum in South Dunedin.

The museum's five steam-operated engines have sat silent since April, after its boiler - which generated the steam to drive them - failed its compliance certificate and had to be shut down. The museum boiler is in Christchurch being assessed for repair.

''We have been looking at alternatives for how to get the machinery running again,'' Gasworks Museum operations team leader Tom Galletly said.

The Gasworks Museum was delighted to have been offered the ''number four'' Speight's boiler as a possible solution, he said.

The boiler was to be transported from Speight's to the Dunedin Gasworks Museum today, where it would be assessed for conversion to running on heating oil rather than burning coal.

''If it is suitable, we would have to do some rewiring and remodelling of the boiler house. It could be quite expensive - so all the options will have to be explored,'' he said.

As part of the $29 million redevelopment of the Speight's Brewery, the old coal boilers were all being replaced by a more environmentally friendly gas boiler, installed four weeks ago.