ORC to consult on flood scheme 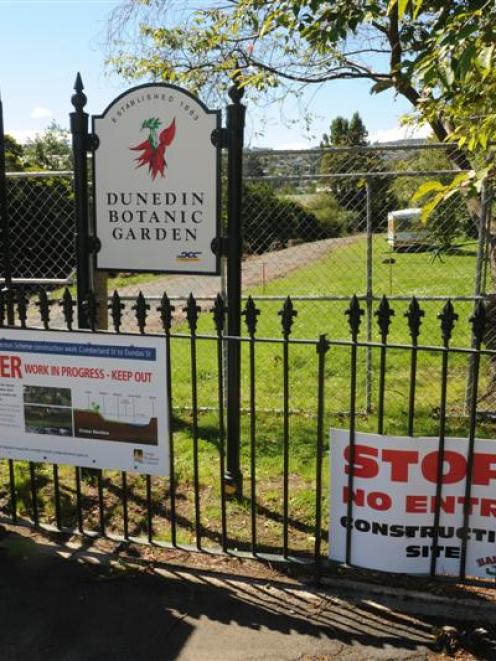 Workers felled trees on the bank of the river before Christmas in preparation for widening the true left bank in coming weeks. Photo by Stephen Jaquiery.
Otago regional councillors have failed to "grab the opportunity" and make a decision on the future of the Leith Lindsay flood protection scheme.

Yesterday they were presented with two options - one to complete the revised 15-stage scheme or two, drop the Lindsay Creek work - but instead chose to put both options, and their funding scenarios, out for consultation, effectively putting off making a decision until June when the council was due to approve its draft annual plan.

It was a move initiated by Cr Bryan Scott, who also asked for more information on the implications and risks in not completing the Lindsay Creek work and what alternative forms of risk reduction could be done.

"In my view, there is insufficient information to exclude the Lindsay."

About 35% of the area directly benefited by the scheme was non-rateable and owned by the Crown.

"Until we get some feedback, we're a little bit in no-man's land in my view."

The motion was carried five votes to four in a meeting that was also attended by the University of Otago's chief operating officer John Patrick.

Chairman Stephen Woodhead voted against the motion, saying after the meeting, he had hoped councillors would see the opportunity in doing the Leith work "after all the heartache and planning" and give the community a "good steer".

I think some did forget we have a consented scheme."

The scheme had been "on the books" since he was voted on to the council in 2004 and he had hoped it was time to "get on with it", although he was aware it could take a "number of years" for Crown funding to be confirmed.

Now, council staff faced the challenge of putting the two options, with the two funding scenarios each, to the community in a form people could clearly understand, he said.

"A lot of information and too many options can be confusing."

The options would be included in the draft annual plan which would go out for public consultation in mid-March.

Once submissions were received and hearings held, the council would again consider the scheme.

Cr Gerry Eckhoff said he was concerned that by consulting on all scenarios, it would be giving the Crown "wriggle room" to ease out of its responsibilities.

He believed the council should opt for option one until government funding was secured.

Cr Gretchen Robertson said the city's current low flood protection level was unacceptable and the council would be irresponsible if it did not forward some form of the scheme.

However, realistically the council was not going to get an answer to the Crown funding question before the annual plan was consulted on.

Cr Trevor Kempton said seeking government funding for the scheme should not be seen as the council seeking a "hand-out" because it could not afford it but because it was equitable.

The Lindsay Creek work should be viewed purely on a cost-benefit basis and he was disappointed more information about the practical effects of not doing the work was not available, he said.