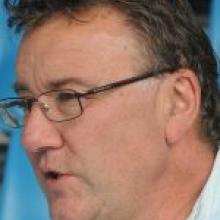 Richard Reid
The Otago Rugby Football Union has begun negotiations to move its offices to the Forsyth Barr Stadium, as the Dunedin City Council prepares to sell Carisbrook.

ORFU chief executive Richard Reid yesterday confirmed the union's intention was to move to the stadium.

The ORFU would not, though, be gone by the August 6 date suggested by council property manager Robert Clark.

Mr Clark said yesterday he was working on a proposal that would go to local and national estate agents for a "full marketing process" for Carisbrook.

There were no deadlines by which the work had to be done, but he planned to do it "as quickly as possible", while getting the best possible price.

In January, the council voted to proceed with the sale of the property, including the car park next door, as industrial land, subject to final consultation during the annual plan.

Public consultation was held last year, and a number of people wanted to keep the facility as a sports ground.

The council was, though, aware it would begin to incur holding costs of about $440,000 each year once the ORFU moved out.

Mr Clark has said he expected willing buyers for the site, with a reasonable possibility the city would break even on the $7 million it paid for the ground.

He said yesterday he did not want to "sell it tomorrow in a mad rush", and not get a good price.

It would take time to put together a detailed information memorandum for the land.

"I would not imagine we would achieve a sale for at least three months; maybe six."

The ORFU's deadline for moving from Carisbrook was August 6, though the exact date would be "a little bit loose", as the Rugby World Cup was coming up, and the ground would be used for training purposes while it was on.

Asked what sort of sales pitch might be used to sell the stadium, Mr Clark said it would be marketed as an industrial site, and with three, maybe four, street frontages.

It was a "pretty interesting" proposition.

Mr Clark said the perception the site was large was deceiving.

It was just 2500sq m larger than the Bunnings site in Strathallen St, South Dunedin.

But industrial freehold land was at a premium in Dunedin, and the council should get a good price, he said.

Mr Reid said the ORFU was "looking at the potential of relocating to the new stadium."

That would not be happening until after the Rugby World Cup, as there were "a variety of tasks" to be performed during the cup, and moving offices took 100% of attention.

The union had only recently begun negotiating to move to the stadium, but he hoped to have the issue "nailed down" by mid-August.