Organising all the fun 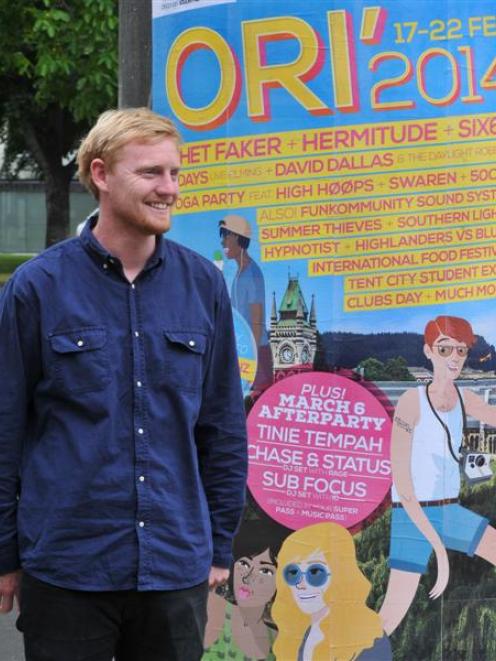 Otago University Students’ Association senior events co-ordinator Jason Schroeder will be a busy man during O-Week. Photo by Craig Baxter
What is your role in organising O-Week?

I am the production manager for the week. I am also involved in the research, contacting and securing of acts as well as a million other bits and pieces.

How has O-Week changed in recent years?

O-Week has grown massively in the last few years, in both the crowd numbers and in the calibre of acts we are securing. Having the Forsyth Barr Stadium right on the campus doorstep has really enabled us to lift O-Week to the standard of a world-class festival. It's not just the music nights that have grown, though. The International Food Festival has really taken off as it has moved to the museum lawn and we are seeing a far greater public interest.

Is O-Week more important than it was in the past?

I don't think that O-Week is any more important now than in the past. Sure, it is getting far more national and international exposure, and the number of students and public we have attending is growing every year, but I believe that O-Week has always been a fundamental and important event in student life here at Otago.

What goes into organising O-Week?

There is so much that goes into organising O-Week! Outside of contracting artists, OUSA works very closely with Dunedin City Council, police, Red Frogs, Southern District Health Board, Forsyth Barr Stadium, and the university to make sure this is as safe an event as possible for all who attend. The organisation of all production (staging, lighting etc) is a huge job and takes months. The OUSA events team starts working on O-Week in September. We have a volunteer team that offers more than 1500 hours over the week and could not run events without them.

How do you attract international acts?

The scale of the events speak quite strongly for themselves. However, being at the bottom of the southernmost country in the Pacific can make things a bit tricky at times! We are able to offer a covered stadium that can host a large crowd and we have a student population of more than 25,000 in Dunedin. We work closely with booking agents, promoters and artist managers as well as looking to see who is touring around the Pacific region over the period or playing at major summer festivals.

What type of mix are you looking for in terms of acts you want to attract?

Being a students' association, we look to offer acts that will have a wide appeal to our students. This year we have a great mix of hip-hop, indie and electronic, which is really exciting. Our goal is to try to offer acts that will appeal to as wide a spectrum of student tastes as possible while still generating the numbers that allow us to attract major international acts.

How happy are you with this year's line-up?

We are incredibly happy with this year's line-up; it's the biggest we have hosted. Last year we managed to secure Macklemore, who went on to become a No 1 hit across the globe as well as win a bag of Grammys. We really did set a precedent that we have aimed to match and surpass this year. We have two nights of international artists this year with Chet Faker & Hermitude and the After Party, which will be showcasing artists who have headlined Rhythm and Vines, Future Music and major festivals around the world. We also have two of the biggest New Zealand acts in Six60 and David Dallas. Then there is 7 Days.

What will you be doing during O-Week and how busy will it get?

I will be pretty much living at the stadium from the Thursday beforehand through to the Saturday after O-Week. My main job is to liaise with production contractors, artists and the venue to make sure the set-up runs smoothly and without a hitch. It will get ridiculously busy.

What is rewarding about the job?

There is something hugely rewarding in being able to stand at the top of the stand and look down over 5500 people dancing to the music of an event you have helped built from the ground up. It makes all the long hours, stress and hair-pulling worth it.

What is the most challenging part of the job?

A recent study by Harvard University and Careercast.com listed events co-ordinator as the fifth most stressful career you can have ... it can get a bit intense sometimes. I guess it's the fact we are dealing with such concrete deadlines as there is zero flexibility in when things can be pushed out to, and if something goes wrong in the 11th hour, it has to go ahead regardless.