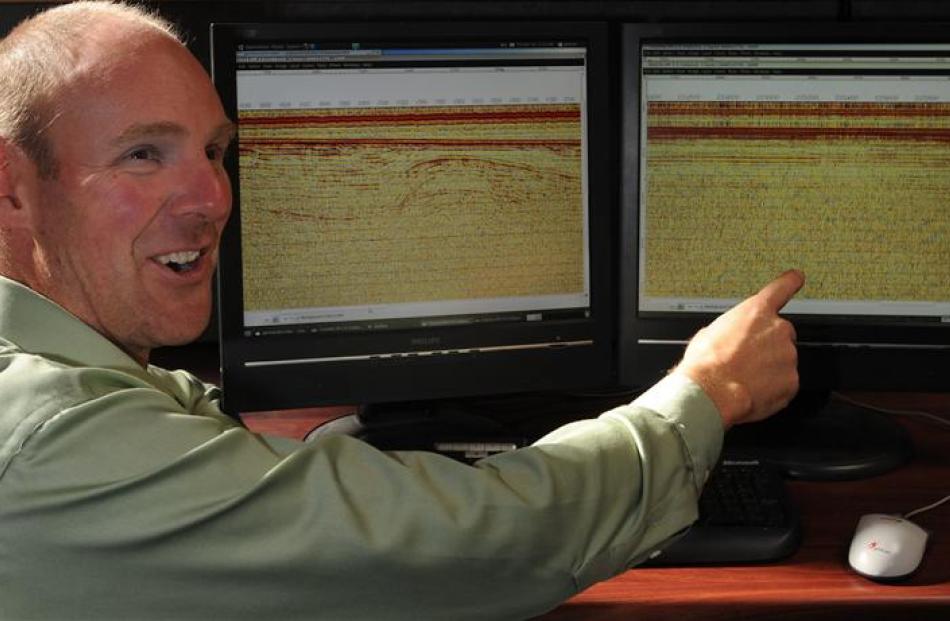 University of Otago seismologist Dr Andrew Gorman points to details in sea-floor imagery generated by acoustic testing off the Canterbury coast, after the recent magnitude 6.3 earthquake in Christchurch. Photo by Peter McIntosh.

University of Otago seismologist Dr Andrew Gorman was recently part of a scientific expedition which generated the first acoustic imagery of seafloor geology east of Christchurch, after that city's recent major earthquake.

The week-long expedition was undertaken aboard the 28m-long Niwa research vessel Kaharoa, and different forms of sound-wave testing were used to gather seismic data on the continental shelf close to the coast, to a depth of more than 1km.

"The jury is still out on whether or not there are any signs of past or present earthquake activity in the shallow sediments off the coast of Christchurch," Dr Gorman said.

However, analysis of the data would be a priority over the next few weeks in order to provide new information that could support the "rebuild planning" of Christchurch.

This study is part of the efforts of the national natural hazards research platform, a multi-agency, multi-university and multidisciplinary research effort led by Dr Kelvin Berryman at GNS Science.

Dr Gorman said it had been a "great feeling" to be involved in generating the first acoustic images of geological structures and layers close to Christchurch.

The technology needed to protect modern buildings from earthquake hazards was already well developed, but scientists were also trying to better identify past or current seismic hazards in the area, where there had already been "significant suffering".

"It's all little pieces that are being put together to help with the bigger picture," he said.

Data had been generated using marine seismic boomer and airgun devices towed behind the vessel.

The information gathered was being used to "image geological structures and layers" in a region adjacent to the fault that caused the magnitude 6.3 earthquake in Christchurch on February 22.