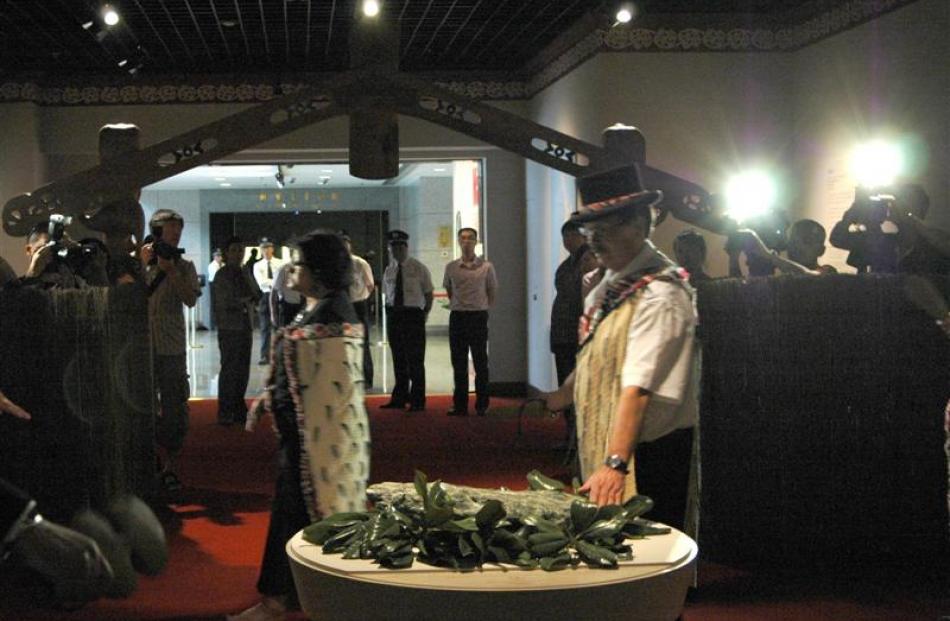 A landmark Otago Museum exhibition which opened in Shanghai this week is a "fantastic achievement" and part of the "great international adventure" Dunedin is having with its Chinese sister city, Dunedin Mayor Dave Cull says.

The exhibition, which was formally opened at the Shanghai Museum with two formal ceremonies and an accompanying press conference on Thursday evening, New Zealand time, is titled "Te Ao Maori: Maori Treasures from the Otago Museum".

It features 337 taonga (treasures) and is expected to be seen by up to half a million people over the next four months.

It is by far the biggest and most complex exhibition staged by the Otago Museum overseas and is the first major Maori artefact show to be displayed at a museum in China.

Speaking at the opening, Mr Cull said Dunedin and Shanghai had been sister cities for 17 years.

"We are both port cities, both elite tertiary education centres and both have prestigious repositories of cultural and artistic treasures, such as those at the Te Ao Maori exhibition." The sister city relationship was "immensely important" to Dunedin, which regarded Shanghai as a "much loved older sister".

The exhibition had been long in the planning and teams at both museums had carried out "an amazing amount of work" over the past seven months to bring the show together. It was a "fantastic result" which reflected not only the quality of the relationship between the two museums but also between the two sister cities. The exhibition had also resulted from close collaboration between manawhenua (the people of our place) and the Otago Museum, he said.

Led by the mayor, a delegation including representatives of the Dunedin City Council, the University of Otago, Otago Polytechnic and the Otago Chamber of Commerce is also in Shanghai this week to foster closer educational, trading, sporting and other ties.

Mr Cull said the exhibition was an important step forward towards a bright future for the two cities. He hoped the exhibition would inspire the people of Shanghai not only to understand Maori culture but also to visit Dunedin and see their own sister city first hand.

Otago Museum Maori advisory committee chairman Matapura Ellison said at the opening the exhibition was wonderful showcase for Maori culture in China. It was also a fine example of the sharing of taonga from one world class museum to another.

This followed the stunning collection, The Emperor's Dragons, which the Shanghai Museum had sent to the Otago Museum in 2008.

For Maori, this occasion was a great milestone, he said. It was also a day of great importance and pride for Ngai Tahu of the eastern coast of the South Island, as well as for Dunedin and for New Zealand, and all those who had joined together for this very special occasion.

It was a great opportunity to be proudly on the world stage not only as a people with a distinct and a valuable heritage, but as a contemporary society which learned from the past to shape the future. It was increasingly evident the contribution drawn from Te Ao Maori (the Maori world) was a critical part of the New Zealand identity.

Otago Museum chief executive Shimrath Paul said developing the exhibition, and working closely with staff at the Shanghai Museum, including Prof Chen Kelun and Prof Li Zhongmou, had been an amazing experience for Otago Museum staff.

University of Otago Associate Prof John Broughton gave a lecture on the role of Maori in New Zealand society to about 500 people at the Shanghai Museum on Wednesday, while Dr Jim Williams, also a member of the museum advisory committee, gave a lecture yesterday in association with the exhibition.

The Shanghai Museum attracts about two million visitors a year.

• John Gibb's travel to Shanghai has been funded by a travel grant from the Asia New Zealand Foundation.