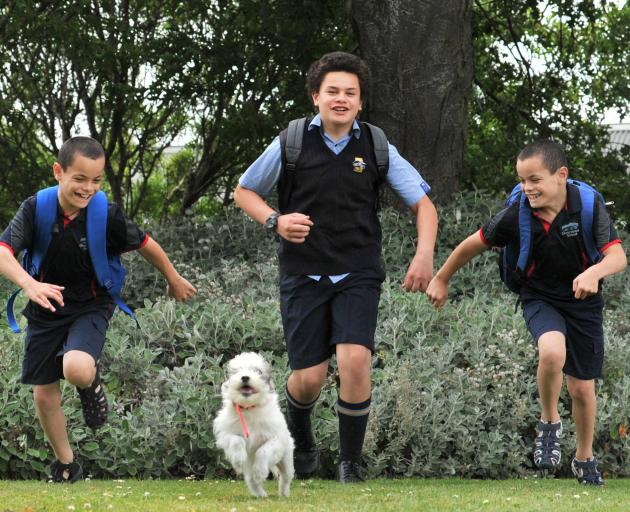 Excited to start the school run with new uniforms are twins Phoenix and Malaki (9) and Chance (12) Curwood, accompanied by Shitzu-Jack Russell cross Nala (4). PHOTO: CHRISTINE O’CONNOR
Dunedin  mum of seven Grace Curwood has plenty of experience buying school uniforms, but each year is a massive struggle.

With four children still at home and needing new uniforms, she estimated she would spend more than $1000 before next week on uniforms.

As soon as Christmas was over, the worry about back-to-school costs sank in, Ms Curwood said.

"I have to get all my kids new items because they’ve grown since I last bought them."

For example, Chance (12) needed a new uniform after outgrowing his old one.

"He’s a growing boy. It’s tough having to buy new items every year even without them actually switching uniforms.

Ms Curwood had looked for the items on Facebook pages but had not found what she needed.

"That’s just my two older ones, I’ve got twins at primary school as well."

She had to cut back in other areas in order to afford the cost of school uniforms, on top of the more than $250 she spent on stationery.

She estimated more than half of her grocery bill was going on uniforms.

She knew having to spend more on uniforms would have a ripple effect for her finances, so visited the Dunedin Budget Advisory Service.

She said the next few months would be difficult.

"I understand there are costs in making uniforms but in two years’ time I will have four in high school. If they all need socks at $15 a pair and that’s the cheapest thing they need, I’m in trouble."

She thought schools should take the cost of their uniforms into consideration.

"I think schools should do swaps if things are in good condition, so that we don’t have to buy brand new ones.

"If I knew I had two uniforms at $500 each to pay off during the year, with it coming out of the school account, that would be good."

Same problem, with 4 kids in uniforms, its an outrageous spend. We've taken to buying from Marks and Spencer in the UK, shirts and shorts, much cheaper than Dunedin suppliers. Its time Schools seriously looked at the style and types of uniforms they have. Who thinks a white shirt is a good choice for teenage boys to be wearing? What's the point of a blazer? School uniforms are antiquated and impractical on top of being exorbitantly priced.