Parkour fans get straight to the point 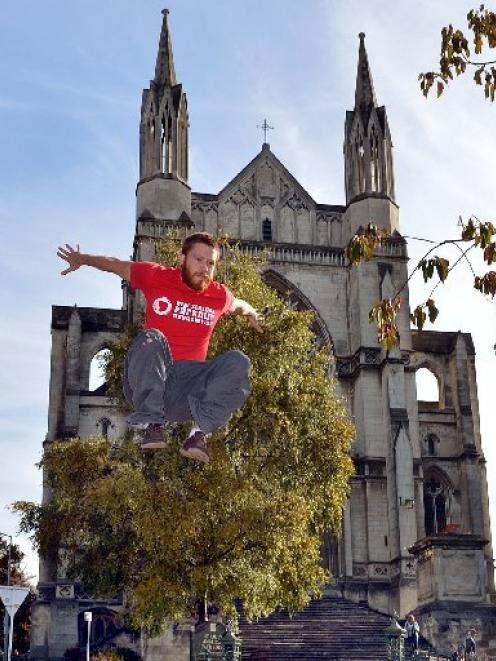 The city's historic architecture and urban landscape has attracted up to 100 parkour practitioners for the sixth annual New Zealand Parkour Association gathering this weekend.

Athletes from throughout New Zealand, Australia and Canada will spend today, tomorrow and Sunday running, jumping, climbing, swinging, vaulting and rolling through the streetscape.

Parkour started in France in the late 1980s and was developed from military obstacle course training as a method of getting from A to B in the most efficient way possible.

It is the first time the national gathering has been held in Dunedin. It was previously hosted in Auckland, Wellington and Christchurch. Association president Damien Puddle spent yesterday scoping the city.

Mr Puddle, of Hamilton, said parkour taught practitioners to overcome obstacles, physical and mental, and developed flexibility in their bodies and minds.

''For some, the physicality of overcoming obstacles is the hardest part. For others, looking silly in front of people can be the most challenging aspect.''

Each practitioner picked obstacles appropriate to them and approached parkour in a different way, so there was no right or wrong, he said.

''The beautiful thing is it's non-competitive.

''You don't have to match anyone else or look like anyone else, and everyone has things they can play to their abilities and how their mind works.''

Association Southland representative Terry Guyton, of Invercargill, said Dunedin was a ''close second'' behind Wellington for offering the best parkour landscape in the country.

Its old buildings, in particular, provided great terrain, he said.

He said the sport was growing in popularity and attracted predominantly teenage males.