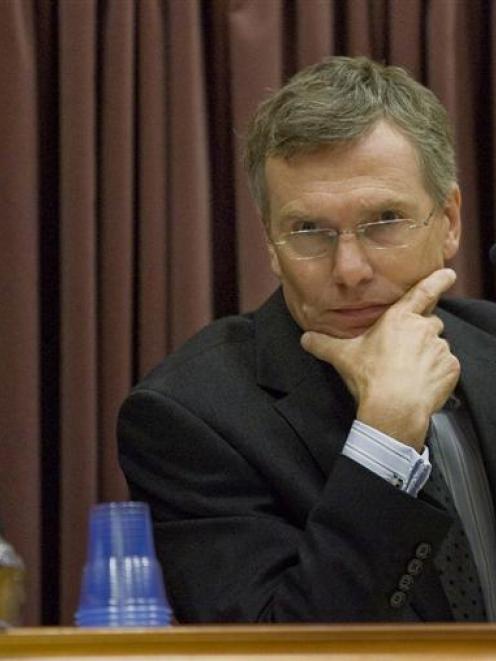 Forensic pathologist Dr Robert Chapman in the witness box yesterday during the murder retrial of David Bain in the High Court at Christchurch.
A British pathologist who examined the bodies of Princess Diana and Dodi Al-Fayed in 1997 says the rifle used to shoot Robin Bain was either touching or very close to his head.

Dr Robert Chapman, a Home Office forensic pathologist, told the David Bain retrial jury in the High Court at Christchurch yesterday he did not agree with Crown pathologists who believed the fatal wound to Robin Bain's left temple was from further away.

He had reviewed the pathology relating to Robin Bain's death and concluded the wound was a contact or near-contact wound, Dr Chapman said.

One of the Crown pathologists, Belfast-trained doctor Emeritus Prof James Ferris, concluded there was powder marking, also known as tattooing or stippling, in the area of the wound, indicating that, by definition, it was an intermediate wound.

However, Dr Chapman disagreed with that finding.

Dr Chapman was giving evidence on the 49th day of the retrial of David Bain (37) for the murders of his parents Robin and Margaret, sisters Arawa and Laniet and brother Stephen.

The defence says Robin killed his wife and the three children before committing suicide, shooting himself in the left temple even though he was right-handed.

But the Crown case is that David Bain shot his parents and three siblings then set the scene to frame his father.

In his evidence, Dr Chapman said he saw no sign of what Prof Ferris described as powder abrasions which would take the wound in Robin Bain's left temple from close contact to intermediate range.

Some of the marks noted by Prof Ferris were "clearly not related to powder abrasion", Dr Chapman said.

He believed one was a large blood spot, and others were skin imperfections, such as blackheads, skin features or small blood spots.

He believed Dr Alex Dempster, the Dunedin pathologist who carried out the postmortems on the Bain family, came to the right conclusion when he said Robin's wound was contact or close contact.

As the person who actually saw the wound, Dr Dempster was the best source of information, the witness said.

Based on its appearance and the various pathology aspects, the wound to Robin Bain was "consistent with a self-inflicted injury", Dr Chapman said.

He described the left temple as a chosen site for suicide and said, in his experience, close-contact head wounds tended more commonly to be suicide rather than homicide "particularly with wounds in the temple area".

But he agreed with Crown counsel Kieran Raftery that he could not say definitely Robin Bain committed suicide.

In relation to the three wounds inflicted on Laniet, Dr Chapman said he agreed the order in which Prof Ferris believed the wounds occurred - the cheek wound, then the two fatal head wounds - "may or may not reflect what actually happened".

It was difficult to establish how long a person might survive, even after a serious brain injury, Dr Chapman said.

He accepted the fluid in Laniet's airways indicated she had survived, at least for a few minutes, and was able to breathe, which could explain the gurgling sound heard by David Bain.

It was possible that could have happened even after all three wounds had been inflicted, he told Justice Graham Panckhurst.

As to evidence from a former mortuary technician about bodies making noises for some time after death, Dr Chapman said he seldom saw bodies within an hour of death and was "rather sceptical" about such noises occurring.

However, he could not exclude the possibility.

To Mr Raftery, he said Laniet was dying from the time she sustained the two serious wounds.

He had not particularly considered either of the serious wounds but had looked carefully at the photographs and pathology of the survivable wound to the left cheek in relation to the range at which it was inflicted.

His view was the cheek wound was an intermediate one "between contact, near contact and distant injuries", Dr Chapman said.

He described a distant injury as one where all that was seen was the effect of the bullet.

But he was not prepared to put a figure on the distance at which the cheek wound was inflicted, saying that was a ballistics question.

Asked by Mr Raftery if a textbook example of a similar-looking wound suggested some markings in the area of Laniet's cheek wound could be stippling, Dr Chapman said he did not think it looked like it.

While he was unsure whether some other marks might be "stippling", indicating a close-contact wound, he agreed it was "possible".