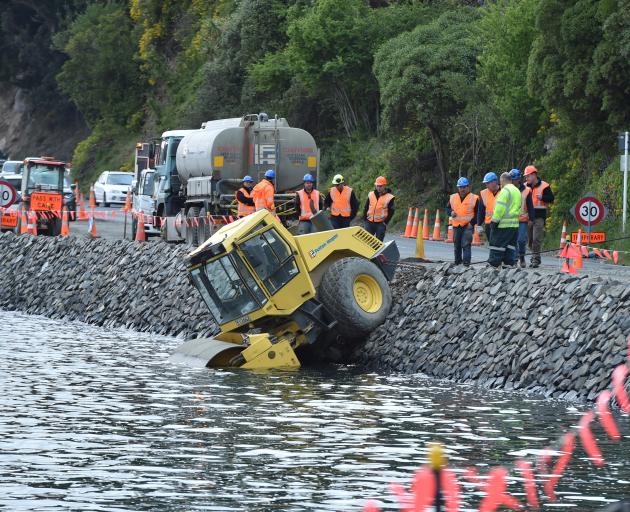 A Fulton Hogan roller that slipped off the Portobello Rd work site and into Otago Harbour last week. PHOTO: GREGOR RICHARDSON
Fulton Hogan has stopped all work at its Otago Peninsula work site for the next two days after senior managers visited and found more safety violations yesterday.

The company - which is working on the Peninsula Connection safety improvement project for the Dunedin City Council - flew in senior managers and health and safety staff to inspect the site yesterday.

The visit followed an accident last Thursday in which a roller driven by a Fulton Hogan staff member slipped off the Portobello Rd work site and into Otago Harbour.

The driver escaped unhurt, but it was the third crash on site involving Fulton Hogan following two previous vehicle roll-overs in July.

Last night, a Fulton Hogan staff member who works at the site told the Otago Daily Times the visit by senior managers had identified more issues.

That included contractors working under an excavator's bucket when it was full of boulders, the worker claimed.

As a result, the company decided to shut the site abruptly yesterday afternoon and workers were sent home, he said.

The work site was to remain closed today and tomorrow.

He had not heard of concerns about workers standing under excavator buckets, but had been told of another incident in which a subcontractor got out of a vehicle to stretch his legs while not wearing required safety gear.

Mr Drew said he would be making further inquiries about the more serious allegation, which was "potentially quite troubling''.

Despite that, he said Fulton Hogan appeared to be taking the health and safety situation at the site "very seriously''.

The two-day site closure would allow the company to focus on improving health and safety culture at the site, particular heading into the pre-Christmas period, when more accidents typically occurred, he said.