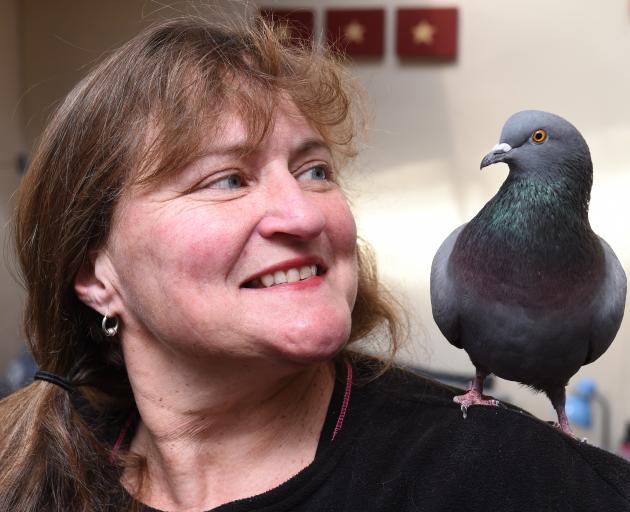 Her pigeon Mo is well known in the Macandrew Bay area, flying around the neighbourhood, poking around people's houses, and making trips to the local coffee cart.

She has even been known to ride the bus.

Ms Davies, a gardener, sometimes takes Mo with her to work - and said the pigeon would find her way back before Ms Davies returned home.

Mo would follow her sometimes when she rode her motorcycle, Ms Davies said.

''She's pretty funny. She loves it when I'm outside in the garden. She just comes to work with me and beetles around the place.''

She got Mo from Bird Rescue Dunedin about two years ago, after she was found injured, and said she coexisted happily with Ms Davies' cat and pet cockatiel. 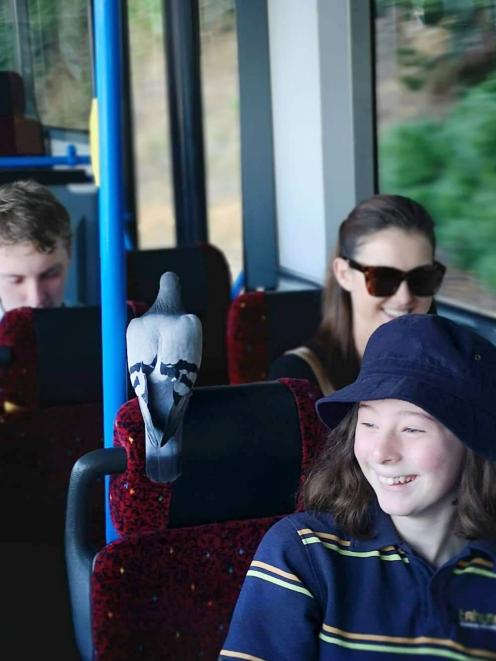 Mo on the bus with Tahuna Normal Intermediate School pupil Hannah Hogan (12). Photo: Paul Pope
''She worked out how to work the cat door and thought she would do it too.''

Among Mo's other quirks was stealing her owner's jewellery and taking it up to her nest, acting like she was ''part magpie''.

When visitors came to the house, she would often perch on their heads.

While most people accepted Mo as a bit of a local character, she had recently had ''a little bit of a hiccup'' when someone cut her tail feathers.

A university psychology lecturer has received a $50,000 grant to study pigeons' cognitive abilities in their natural habitat, evidence so far suggesting they could be as intelligent as primates.

News of pigeons' intelligence came as no surprise to her, Ms Davies said.

Bird Rescue Dunedin founder Sue Cook said pigeons were ''really affectionate'' and a lot of them came through the bird rescue.

They were easy to turn into pets if you hand-reared them - and if you found a baby pigeon, the best thing to do was to feed it whole peas.

While kereru or wood pigeons came through bird rescue a lot - being accident-prone - rock pigeons were less likely to fly into windows.