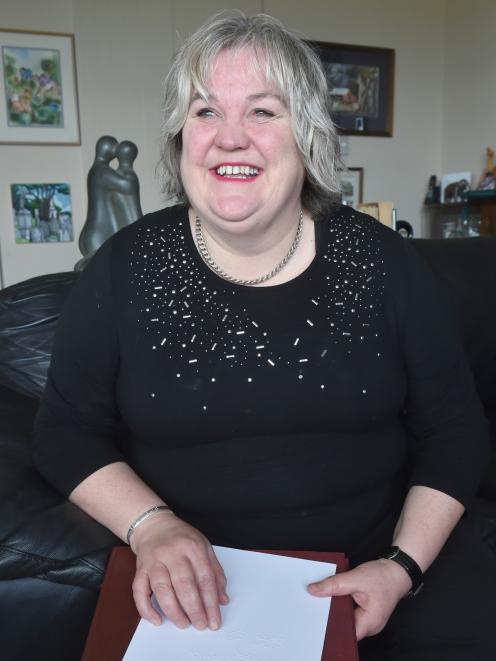 "I wondered why she was writing to me," she said yesterday.

Ms Woods, who has been totally blind since 2008, sent Jacinda Ardern and her partner, Clarke Gayford, a Braille telegram when their daughter Neve was born on June 21.

It was like the old-style telegram — but in Braille — and the message was "Welcome to the world, Neve Te Aroha Gayford Ardern."She had also written the couple’s names on cards in Braille.

"But I hadn’t expected to hear anything back," Ms Woods said.

So she was very excited when husband Ron Esplin told her on Tuesday she had a letter from the Prime Minister. She asked what was in the letter and her husband did not know, telling her "It’s in Braille".

Her fingers revealed the Prime Minister was thanking her for the kind wishes sent in the Braille telegram, congratulating her and Clarke on the birth of their baby daughter, Neve.

"She said they were doing really well and appreciated the kind wishes and support they were getting. She thanked me once again for writing their names in Braille and ended with ‘kind regards, Jacinda Ardern, Prime Minister’.

"Wow! Imagine how it felt to have my Braille fingers read that!" Ms Woods said.

"I was pretty impressed."

She had chosen the old telegram form of communication because it enabled short and pithy messages — "about the perfect length and medium for sending sighted people a message in Braille".

And she had wanted to write Ms Ardern’s name since starting her dream of writing the names of a million people in Braille.

"So when she had the baby, the time seemed just right. I thought she might enjoy seeing her baby’s name written in Braille. I think having a female prime minister have a baby in office is inspiring," Ms Woods said.

She believed that, although the letter was from the Prime Minister’s office, the Blind Foundation would have written the Braille.