The Dunedin North MP yesterday offered his resignation to Prime Minister Jacinda Ardern for a second time, having had a similar offer in April after he breached Covid-19 regulations rebuffed.

In April, Ms Ardern instead demoted him but retained Dr Clark as Health Minister as a change in the midst of a health crisis would be too disruptive.

But today Ms Ardern said Dr Clark had concluded that his presence in the role was creating an ‘‘unhelpful distraction’’ from the Government’s response to Covid-19.

“It’s essential our health leadership has the confidence of the New Zealand public,’’ she told media.

‘‘As David has said to me the needs of the team must come before him as an individual."

Ms Ardern said he had thought through what had happened in the past weeks and this was his view that he needed to go.

"Whilst Minister Clark made this decision, it is one I agree with."

Education Minister Chris Hipkins has been appointed Health Minister until the general election on September 19.

In a press conference in Wellington this morning Dr Clark, flanked by fellow ministers Kris Faafoi and Grant Robertson, said serving as Minister of Health had been an absolute privilege.

‘‘The team must come first and New Zealand’s Covid-19 response is simply too important in my view, so I have made the call that it is best for me to stand aside,’’ Dr Clark said.

‘‘I could not be more impressed with how New Zealanders and our health system have responded to Covid-19 - the response from health workers has been astonishing and I want to take this opportunity to thank the medical, nursing and allied health workers who have kept us all safe by putting themselves on the front line.’’ 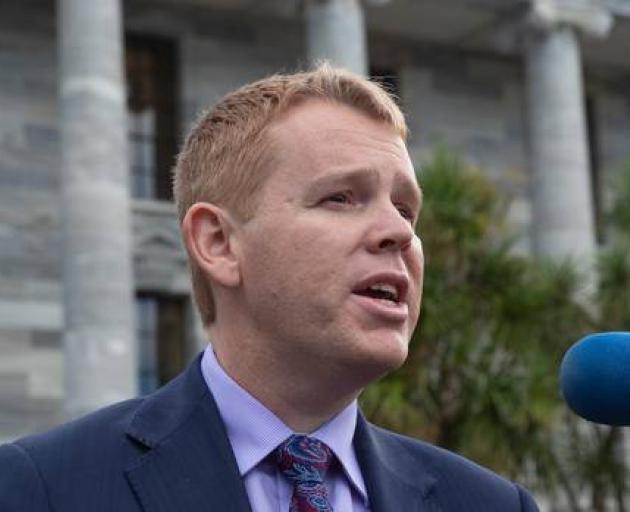 Public perception of Dr Clark suffered when, like almost all Cabinet ministers, he spent the Covid-19 lockdown period at home rather than in Wellington.

He suffered a further PR reversal last week when footage of his stating breaches of Covid-19 quarantine regulations were an operational rather than a ministerial matter - which showed a seemingly crestfallen director-general of health Ashley Bloomfield in the background - was widely distributed on social media.

Dr Clark today paid tribute to Dr Bloomfield, saying in had been an honour to work with him.

‘‘He is an exceptional public servant,’’ Dr Clark said. ‘‘Thank you Ashley and your team for the work you have done for our country during our most serious health crisis in a century.’’

As Minister he also oversaw the inquiry into mental health and addiction services and Heather Simpson’s review of the overall health system.

Dr Clark said his political career was not at an end, and he would again stand for Labour in Dunedin in the election.

The Prime Minister said she received Dr Clark's resignation yesterday and revealed she had discussions last week with him and the importance of the Government's Covid-19 response.

Ms Ardern said the discussion they had was open: "What has become clear to both the minister and an assessment I agree with is that unfortunately his role was continuing to be a distraction to our response, and that just wasn't something we could have continue."

"I want to thank him for his service, he delivered a lot in his three years. We cannot afford any diversions from our objectives."

Dr Clark will not be reappointed next term, she said.

“Post-election I intend to reassess who is best placed to take the health portfolio forward."

Earlier, Ms Ardern said in a statement it was essential the public had confidence in the health leadership.

"David has come to the conclusion his presence in the role is creating an unhelpful distraction from the government's ongoing response to Covid-19 and wider health reforms.

"It's essential our health leadership has the confidence of the New Zealand public. As David has said to me the needs of the team must come before him as an individual.

"Our response to Covid is on a stable footing and I have full confidence that Minister Hipkins will oversee the portfolio with the thoroughness and diligence he brings to his other areas of responsibility."

He suffered a further PR reversal last week when footage of his stating breaches of Covid-19 quarantine regulations were an operational rather than a ministerial matter — which showed a seemingly crestfallen director-general of health Ashley Bloomfield in the background — was widely distributed on social media.

His breaches during the lockdown showed that he was arrogant, but when he threw Dr Bloomfield under the bus last week he showed that his arrogance was superhuman, and that any integrity he was purported to possess was just a myth.
Hopefully he will find enough decency in himself now to not stand for reelection.

What a sham, Sorry resignation is not the right move, Clark should have been booted with all his privileges removed. Grow some PM its not a oh we need to do this type play environment.

Should have gone months ago. Keeping him on showed the PM's lack of judgement and the paucity of competence in the cabinet. Hipkiss for goodness sake; he can't even cope with education.

Normally I’d be more concerned about the loss of a local representative who’s also the minister of health - until one considers the complete lack of advocacy Clark has shown towards North Dunedin, or New Zealand’s premier example of an underfunded, under-resourced DHB. Dunedin and Otago desperately need politicians who represent their constituents, not tow a party line.